Hillary Can Run All She Wants, Bill Will Follow 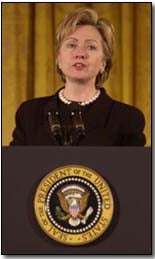 Now, comes this poll from the Marist Institute for Public Opinion and the pollster there, a guy named Lee Miringoff. Nearly seven of ten Americans, do not want to see Hillary Clinton run for the White House in 2004 or any other time. The poll showed 69% of voters nationwide never want to see Hillary take a stab at the presidency. Maybe take a stab at Bill, but not at the presidency. “She’s a very polarizing figure,” says Miringoff. She does okay among Democrats, and that’s about it.
Even among her fellow Democrats, Hillary has only modest support. About 42% support her in a run for the presidency while 53% said she should never seek the job that her husband held for two terms. A slim 37% view Hillary favorably, while 53% give her a thumbs-down.

I think this poll probably has a fairly decent chance of being pretty accurate. I think it may even be more than 70% that come out and vote against her. I don’t care how much time goes by, because it doesn’t matter. However much time goes by, her husband is still going to be there. You won’t believe what this guy did on Monday. I hope you Democrats don’t do this, but you have to have a meeting to get this guy to shut up. He’s campaigning for this gal, Shannon O’Brien, running for the governorship of Massachusetts, and he said that one of the best reasons to elect this woman is that it will be ”a wonderful way to celebrate the 10th anniversary of my victory in 1992.” Can you believe this?
I am not kidding. That’s what he told people in Massachusetts. And, of course, they all cheered, the doofuses. So, let them run Hillary for president whenever they want, because Bill comes with her – and Americans will turn out in droves to vote against them.