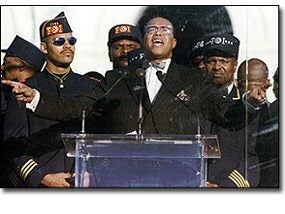 Would that be the case if this guy had fit the profile they were pushing on us of an Angry White Man, and it turned out he’d worked security for some Christian group? This is a valid part of this perp’s profile. NOI group is paranoid about being infiltrated. You don’t just happen to walk in off the street, show some credentials to the guy handling Calypso Louie’s band and say, “Hi, I want to be a security guard for your march.”
So I’d like to know who hired this guy and on what basis. I’d also like to know what role the number 19 played. Why did he to be a security man for what turned out to be the Two-Hundred-Thousand Man March. It’s all too easy to point to Al-Qaeda with Muhammed getting license plates on September 11 – while driving a Cadillac. Of course, he was caught in a Chevy Caprice. (So much for the white van.) There are a lot of questions that remain unanswered, and that won’t get answered if we’re afraid to ask them.