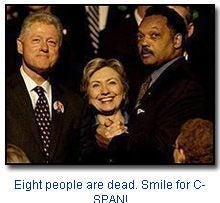 Everything that was said, and by whom, was practically scripted in Washington, including the apology the day after from the campaign chief for the Wellstone campaign. The whole thing was planned, as I suspected and said so on this program, by the Democratic Party. Terry McAuliffe signed off on it, because this is war. They haven’t been able to get their issues out there because of Iraq and the sniper, and they had to do something to rally the troops and rally the base out there. So, booing Trent Lott, booing Republicans, using Paul Wellstone’s death, was all part of their cynical plan.