Rich Elitist DiFi Has Hers, Wants Yours 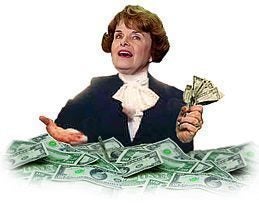 DiFi appeared on Wednesday’s Hardball with Chris Matthews, alongside freshman GOP Senator and truth teller John Sununu (R-NH). To illustrate how our message is getting out there, listen to the exchange in the audio link below. Matthews actually asks Feinstein why the Democrats have no new ideas and why they always play the class warfare card. This is simply not a question anyone would’ve asked before the EIB Network began broadcasting 14 years ago.
Remember that 70% of our economy is consumer spending ? and that saving or spending helps. It’s not up to people in Washington to decide who “needs” what. We don’t give them our paycheck like children and have them decide what we should do with it. The idea that you?re evil and need to be kept down as soon as you accumulate a little wealth is obscene. It’s like when Bill Clinton said of the surplus in January ’99, “We could give it all back to you, and hope you spend it right…” They think they have a right to pass judgment on the money work for!
Don’t all of you who are earning 30 or 40 grand a year hope someday to get up to a million? Of course! That’s why you’re working so hard – even though you work as a slave for the government. People like Feinstein and Linc – with a $50 million net worth each – want to make sure you don’t get up near their level. President Bush is taking on this class warfare garbage, and reminding people that taxing the rich doesn’t improve the life of those at the bottom one bit. It’s just an effort to feed bitterness among the bottom rung, while building a political power base.
DiFi herself voted for the Bush tax cuts to reduce the top rate to 35%. In fact, she voted in 1986 to reduce that rate to 28% – at a time when the deficit was higher than today, when it’s the smallest percentage of GDP ever. Compare her stale rhetoric with this Sununu quote: “You don’t get deficits by cutting taxes. We have a deficit today because the economy tanked, revenue collection slowed down. The most important factor to closing the deficit will be economic growth.” Bingo! This is the truth, and the Democrats know it.