As you know, we’ve been touting the Marines Corps-Law Enforcement Foundation since its inception. I was present in the home of the co-founder, Dick Tarykian, along with James Kallstrom and a bunch of their buddies from the Marines, back in the early nineties out in Rockville Centre on Long Island, on the night that they started this organization to provide college scholarships for children of Marines killed in action. 100% of what’s donated is given to the recipients. There is no overhead, no expenses, and nobody takes a salary. 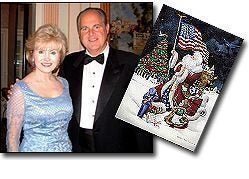 Friday evening I met Brenda Harris Tustian and her husband, a lovely couple from Texas, who were invited to attend because they were listening to this program one day, heard me describe the Marines Corps Law Enforcement Foundation and donated $30,000 made from the charity sale of one of her paintings. We’ve posted a card, with her painting on the cover, that they gave to me at the dinner. Senator John Warner was also bestowed with an award, and the Commandant of the Marine Corps, General Michael W. Hagee was there, as well as other notable and interesting people. 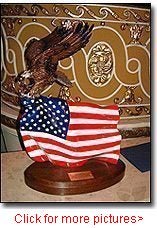 The award I accepted for you was the Johnny Micheal Spann Memorial Semper Fidelis Award. He’s a CIA agent that was killed in Afghanistan. His wife, Shannon Spann, was present and participated in the presentation. The award itself is a beautiful combination American eagle and American flag. We have loads of photos from this event, which you can see right here, both from the awards dinner and the pre-dinner cocktail party, where I met Senator John Warner, who was tremendous. Every time you see John Warner on TV, he’s in his senator mode behaving with Larry King, but I saw a different side of him Friday. He was just funny as he could be, and extremely complimentary about this program and all of you.

The ballroom at the Plaza was jammed with about 500 people. It was a somber night, of course, but it was also extremely uplifting at the same time. In the audio link below, you can hear me summarize what I said as I accepted the award for all of you. I began by asking people if they had any idea what makes this the greatest country ever ? and discussed my utter awe at the greatness of this country, the vision of our founders in creating it based on our God-given right to be free, and my respect and admiration for those who put their lives on the line to protect our freedom.
These people who are willing to lose their lives in defending and protecting this country and its Constitution, deserve our utmost gratitude. We have the Marines Corps-Law Enforcement Foundation and other organizations, which seek to care for their families and see to it they don?t live in a financial vacuum. It’s a great thing that the Marine Corps Law-Enforcement Foundation does, and I told them that it was a privilege and an honor to be associated with them. You in this audience have done so much for these families over the years with your generosity, but there’s always a need, folks ? and if you’d like to send a donation, they are accepted strictly by mail at the address provided below. You couldn’t contribute to a greater cause.