What Were You Saying in Your Unintelligible Introduction, Senator? 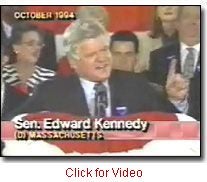 The question that focused on the hilarious Teddy video Rush 24/7 members can watch in the
Best of Rush on TV archives, came from John Gostkowski of Amherst, New York. John sent me an e-mail subject lined: “I Spoke w/ Ted Kennedy on C-Span” He asked the senator what he was saying because, “I’m sure it was inspiring.” Uncle Teddy said that if John dropped him a note, he’d go back and check the record, adding they get “pretty excited” at such rallies. Again: don’t try to understand him. He’s not saying anything, and you’ll only drive yourself to drink if you listen.
Why Do You Dems Distort Newt’s “Wither on the Vine” Comment to Scare Granny?
A lady caller from Virginia challenged Teddy on the “wither on the vine” smear campaign distorting Republicans as wanting to kill every old person on Medicare. She then challenged him on the “tax cuts for the rich” mantra, in light of the fact that we just voted tax rebates for people who don’t even pay taxes. Teddy zoomed right by the wither on the vine comment with vague generalities about Republicans hating old people, and then tried to confuse the tax issue by talking about the FICA or payroll tax. The truth is, the earned income tax credit offsets the FICA tax!

Why Should the Working Stiffs Pay for Bill Gates’ Prescription Drugs? 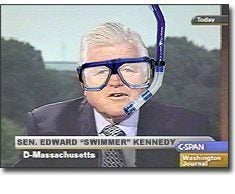 A lady from Independence, Missouri asked Teddy why “poor working stiffs” will have to pay for the drugs of billionaires under his “down payment” Medicare drug benefit. His response is just unbelievable. Quote: “Bill Gates and Donald Trump pay into this program hundreds of millions of dollars in taxes…. They’re paying so much more into this, this is a fly on the wall compared – in terms of – their advantage to get prescription drugs through this program.” Thank you, Senator Kennedy! You just explained why tax cuts for the wealthy are valid: because they’re the ones paying all the taxes! (Read the IRS data) This is just like Democrat governor Gary Locke of Washington state cutting taxes for Boeing. When they’re in trouble, liberals act like conservatives.
Didn’t You Give Us the Legislation that Created Those Eeeeevil HMOs?
Friday’s Washington Journal was a gold star for those of you who listen to this program and called in to throw cold water on Teddy’s liberal fantasies with the facts. So I want to arm you with a question you can put to Teddy the next time he’s on C-Span – which won’t be for a while considering the bumpy ride he had on Friday. Question: This may surprise you people, but the Swimmer himself created HMOs back in the 1970s! Again: you are more informed than real journalists are, which is why I’m so proud of you. This C-Span show was more challenging for Old Kennedy than the last 50 times he’s appeared with Judy Woodruff.