Why Hil’s Sorta Mum on Wilson 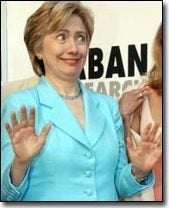 RUSH: A caller wanted to know my opinion on why Hillary Clinton has been silent, for the most part, on this whole Joseph Wilson business. You can hear our conversation in the audio link below. But basically I think she?s biding her time and letting others do the dirty work here because she doesn’t want to field any uncomfortable questions about FBI files and Travelgate and other such Clinton-era scandals.
I think this is a situation where other people are doing the talking and Hil’s sort of waiting it all out. She was mute on the issue until Wednesday, when she finally voiced that the best way to get to the bottom of this leak is through an independent counsel, a special prosecutor, someone totally independent that can really dig deep. Anyone want to suggest Ken Starr’s name? Hey, she brought it up!
Even with the press idolatry for her, it’s very risky for Mrs. C to start demanding answers to a bunch of questions like this, because it was that did everything they could to hide this kind of data when they were in the White House. They had the 500 FBI files. She?s the one who couldn’t produce the Rose Law Firm records for two years and then when they did show up (with her fingerprints all over them) she had no idea how.