Open Line Friday Caller Fred in Reno, Nevada: “Rush, I see a double standard here, and I think you are being unfairly persecuted. Everything you have said about McNabb is true and accurate, and Donovan McNabb is not a great quarterback. Joe Montana is a great quarterback. In the 1980’s, Isiah Thomas said, ‘If Larry bird was black, he’d be just another basketball player in the NBA.’ That was true. He wasn’t fired. He wasn’t fired at all. And when they made the movie White Men Can’t Jump, they did not condemn the movie as a racist slur.”
This last point brought up one of the many words the speech police have redefined. That word is “racist.” In America today, that word has been redefined so it cannot apply to minorities – and further redefined so that it simply means someone a person of color finds objectionable. Why, if you disagree with a person of color they will stick that label to you! This is the official line of the civil rights coalitions and the people who live and make money in the race business: minorities cannot be racist because they do not have the power to cause racism. 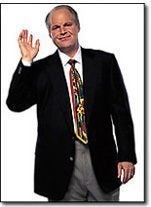 Only “white” people can be racist because only they have the power to implement their bigotry. This redefining of the word “racism” leads to the acceptance of Al Sharpton, who is one of the biggest racists in the country. It’s not even arguable. Constitutionally my right to free speech is protected, but in reality I cannot have it because I disagree with what the left wants me to say. Other people are affected by this far worse than I have been. My situation just happens to be public, but people without notoriety or fame find themselves slammed like this all the time.
OLF caller Gene in Morristown, New Jersey also felt I had nothing to apologize for in what I said. It was an opinion – but an opinion that’s almost illegal to express if you’re of a certain political bent. Gene feared that all these media attacks were designed to keep me from talking about the issues. I have received a lot of e-mails from people who share this concern, that this is an orchestrated offensive. It may be in Arnold’s case, because the Los Angeles Times had that shaky story for a long time. In my case, the ESPN thing and the other news items are totally self-contained.