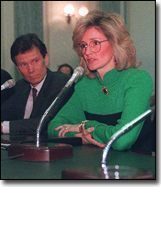 Linda Daschle, wife of Senate Minority Leader Tom Daschle, is a highly paid (just how highly we don’t know since she and her husband refuse to release their income tax records) lobbyist for this company and for this deal. The EIB Network was one of the earliest whistleblowers on the tanker scandal, and remains the only news outlet to remind everyone that Linda Daschle plays a key role in ramming it through Congress. By law, Mrs. Daschle is barred from lobbying the Senate, folks. Do we not have a right to at least if she broke any laws in lobbying using her husband’s influence to win this $18 billion contract?
Boeing has fired two officials for ethical violations including their CEO, folks. After screaming about Enron for two years are the Democrats going to hold their own house to less of a standard than an corporation? How can we not have heard the name of the lobbyist that put the deal together mentioned in the mainstream press? How can Congress – which investigates allegations of wrongdoing without any evidence whatsoever, but merely based on the “seriousness of the charge” – not at least ask a few questions?