Bush Has Perfect Temperament For Job

First of all, the president didn’t “need” any other nations to help or to okay defending ourselves. Secondly, as Bush pointed out to CNN reporterette Suzanne Malveaux, by “internationalization” she clearly meant France and Germany – yet we have 60 nations in our coalition! What is this elitist obsession with the Paris-Berlin-Moscow Axis of Appeasement? They wanted no part of the liberation. They didn’t mind the status quo of mass graves and rape rooms. So Bush isn’t going to give them U.S. taxpayer dollars to rebuild the nation they willingly let Saddam Hussein rip apart. They can cooperate in other ways, but not those. 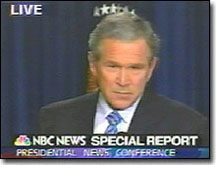 President Bush also nailed a question by Bill Sammon of the Washington Times. Sammon – “Big Stretch” in the president’s pantheon of nicknames – asked, “Howard Dean recently seemed to muse aloud whether you had advance knowledge of 9/11. Do you agree or disagree with the RNC that this kind of rhetoric borders on ‘political hate speech’?” The expressions that played across the president’s face as he deflected this question were truly priceless. He finally responded: “There’s time for politics. There’s time for politics, and I – it’s an absurd insinuation.”
You may recall Newt Gingrich last week, ladies and gentlemen, said the Iraq policy was off the cliff. I disagreed. I’ve got my problems with Bush on the domestic side, but when you talk about national security in view of who his opponents are and what they want to do, it’s no contest. You don’t need reactionaries in the White House when the national security is at stake and you’ve declared war on terrorism after the terrorists declared war on us. You need somebody with a proper temperament who is not engaging in politics, somebody who stays the course and does not react to every little bit of criticism – be it from his own team or not. I think this is a great illustration that we have a man with the exact, correct, right temperament to be occupying the office at this time, given the challenges that we face.