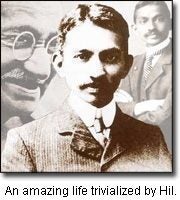 If a Republican had made a joke about Mahatma Gandhi working at a gas station down in St. Louis all hell would break loose. Wait until you hear it yourself in the audio link below. Then think about poor old Trent Lott, and what happened to him. It’s just more of the same double standard. Remember, Trent Lott apologized too. He apologized 18,000 times. He went on BET. He called Sean Hannity to apologize. Hillary just apologized once and everyone says, “Okay, that’s it – fine and dandy.”
When you consider the reality that we never did have illegal immigrant labor pumping gas, Hillary Clinton’s Mahatma Gandhi joke is doubly offensive, not just insulting to Mahatma Gandhi and Indians, but insulting to all immigrants, thinking that that’s what they did, pump gas. I’ll tell you one thing, folks. Where did Martin Luther King used to work, Hillary? Is that going to be your next joke?