You Define Who You Are 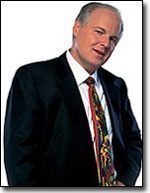 RUSH: We live in an era where you’re complaining about unemployment. You’ve got eight kids that are employed, and you are whining about it. You know, you can call them statistics, but there are surveys of the American people, the happiness index is as high as it’s been in who knows how long, particularly since 9/11. Economic opportunity, the consumer confidence index, all these things – contrary to what you say. Now, this is not to say that there isn’t some suffering going on out there. Nobody always does well, and people that do well today may not do as well tomorrow. You know, things are cyclical and run in cycles.
It takes work, it takes stick-to-it-iveness and nothing is easy. And that’s the problem I’m hearing when I talk about, or hear about people living at home, they’re looking for the easy way or the shortcut in order to acquire the lifestyle that they want. This is not to deny that there are people that are hurting and not doing well out there. But to say that that is the national sample and so forth is a mischaracterization of how life is in the country today, and certainly what the opportunities are. Now, if you want to talk about underemployed, I have a theory – and I know this is going to be very, very, to some of you people, very cold and very chilly, but if you are underemployed, there’s one reason for it: You.
Not you personally, sir, but I mean, if somebody is underemployed, there’s something they can do about it. You don’t have to sit there and just take it. Life is not what happens to you. Life is what you make it, life is what you do. Too many people have the attitude that life is what happens to you. You grow up, you go out there, and here comes this glob of mess thrown at you and that glob of mess thrown at you – you have no choice but to take it. You do have a choice! You don’t have to take it. Some things you do obviously, but I mean you work toward getting to some degree of independence and contentment, but the freedom and the opportunity exist in this country to do it.

You know, it takes all kinds, and thank goodness there are some people who think life is what happens to them because we need ’em. There are certain things that only they will do. But anyone is free to grab hold of the reins of life and make life what they want it to be. It’s hard sometimes, because you know why? Because for most people grabbing hold of the reins of life and making your life what you want it to be is change, and change or anything new is very, very hard. Routines are easy, habits are easy, and sitting there and being a victim and blaming somebody else for your lot in life, that’s easy.
Victimhood is the easiest thing in the world to do, and it’s a trap. But grabbing hold of things and realizing you only have one life, and you only have so much time. And some people are raised with this notion that life’s not to be enjoyed, too. Some people think life is meant to be endured for whatever reason – parents, grandparents, church, religion, I don’t know. Some people think life is not meant to be enjoyed. You’re having too much fun then you’re not doing enough serious stuff. You’re not doing enough serious stuff, then you’re not working hard, whatever. We have all of these conventional wisdom ideas we’re raised with that imprison us.
Who says life’s not to be enjoyed, and who is to define that but you? Life could be made whatever you want it to be, but if too many people sit around and think they’ve got no control over it, they’ve got no say-so over it, life is whatever happens to them. It’s not, unless you allow it. Who’s to say you shouldn’t be happy? Who’s to say you shouldn’t have peace in your life? Who’s to say that you have to go through suffering 24 hours a day, seven days a week? Why do you have to do that? Who said that?

Somebody told you that when you were young, somebody implanted this idea in your head that that’s what life is, that the real greatness in life is those who have overcome suffering and all of this. Who says that? You know, we all have so many of these old sayings, conventional wisdom, wives’ tales that imprison us. Why, with all that’s out there to experience and to enjoy, to achieve and to accomplish, why sit out there and just surrender it to others? Who’s to say it’s not yours? Who’s to say you have to sit there and just let whatever life dumps on you every day be what your life is? So when somebody is underemployed, they’re choosing it.
Now, I know this sounds coldhearted and cruel and mean-spirited, but it’s not. It’s optimistic and motivational. If you’re underemployed it means you think you’re better than where you currently are. Well, if you think you’re better than where you currently are, who’s going to do something about it? You going to wait around for that to be recognized by somebody? Or are you going to go demo it for somebody? You can sit around and wait all day for people to realize what you want about you. It’s not their job to do that. They’re too worried about themselves and how you think of them. You’ve got to take control of yourself.
You’ve got to take control of your life, and you’ve got to realize that you’re the one that defines it, not anybody else. Not your mom, not your dad, not your sisters, not your grandparents. You define who you are, and you define your life, and you are the one that gets to set the rules as to how life is going to be enjoyed and how it’s going to be pursued. And if you give up those rules to somebody else, then you are to blame for where you are if you don’t like it. I know this is hard. I’m here to tell you this is hard, because none of us are raised this way, and none of us are told this. We’re all told the other. We’re all told that people who are rich and doing things great are lucky, that it just was handed to them or that they’re different, or that – forget rich – people that just appear to be happy to us, and if we’re not? It’s just the luck of the draw.
“I wish I were them. Gee, I can’t be what they are, I wonder why. I don’t come from the right part of town, don’t know the right people” or what have you. That’s not how it happens. And the odds are the people you think are happy probably aren’t anyway, they’re just covering up their own misery. So you get all trapped in this stuff, and you see other people happy and makes you miserable, you get mad at them! They have nothing to do with your misery, don’t even know you and yet you’re sitting there getting all unhappy about it. Life is to be lived. Life is to be grabbed onto. Life is to be defined by you, nobody else – including your parents. It’s to be defined by you. If you let somebody else define it, and you sit around and be worried what other people think of you, then you’re imprisoned by it.