Caller Knows What’s Good For Him

CALLER: I think what we’ll be able to report this year will be in the range of about high eighties. 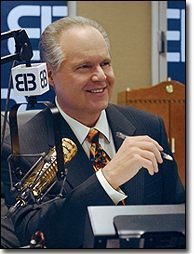 RUSH: High eighties. Well, you see, this is going to present a problem. Because in the John Edwards’ view of things you are an elite, Park Avenue resident. You’re an elite rich person. You’re going to get lumped in with all these friends of Bush from Halliburton and Boeing and everybody else. If you can live your life that way at $80,000, you don’t need that much money.

CALLER: Only because we both work hard.

RUSH: I don’t care about the qualifications. I’m just saying that you’re able to enjoy life. That’s not possible. Americans are not enjoying their lives. So somebody like you comes along – John Edwards has got to disqualify you somehow because you don’t fit his portrayal, nor Kerry, any of them, I don’t care. You don’t fit their portrayal of America. You shouldn’t be happy. If both you and your wife are working and reporting $80,000 of income, then you’re not typical, you’re not average. It’s people like you that are probably taking from?Are you obese, by the way? Do you eat a lot of food?

RUSH: Uh-huh. All right. Well, that’s good, because if your kids are obese, then it would be even worse for you.

CALLER: Sure. No, we’re just a lot better off. The child tax credits allow us to deduct so much more than we used to a few years ago. It’s so much fairer for people who are out there working, and we have that kind of income because we both work.

CALLER: And we wouldn’t have that if it’s just one of us. So that’s all I wanted to say. Thanks for your time.

RUSH: Now, wait. Are you saying that it takes both of you to work? Do I miss a point that you were making?

CALLER: Well, given that we live outside Philadelphia, real estate is expensive. We have a modest home, but it’s not cheap to live there. You know, property taxes are high.

RUSH: Yeah, but you’ve got McNabb as your quarterback. It doesn’t get any better than that.

CALLER: Well, it would have been better than that if he had gotten past the NFC championship game.

RUSH: Look, Mark, you’re a great call, and I’m going to tell you why. Here’s a guy assessing the situation. He understands that his circumstances are what they are, and he’s crediting both he and his wife’s hard work, and he is crediting changes that the government has made to accommodate them, and their child tax credit and other things. These things did not happen under a Democrat president. And these things didn’t happen with a Democrat Congress.

RUSH: That’s exactly right. And you’re better off. And you know why. And you’re not afraid to credit yourself in it, either. Now, this is key. You talked about how hard you worked, and that’s good. You’re not the ashamed to admit that. You know, too many people in this country, they’re afraid to admit their participation in whatever it is that has resulted in the life they live. You’ve worked hard. And you see that you’re not being as punished for it as you would have been under a different administration, with a different party running things. And I’m telling you, there are more people out there like this man, ladies and gentlemen, than John Kerry or John Edwards would like you to believe.
END TRANSCRIPT