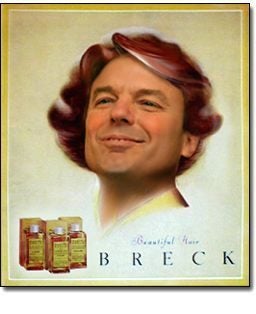 This guy has only a few years in the Senate, most of which he’s spent campaigning for president. I rolled Wayne some clips of this supposed genius in the audio sound bites you’ll hear below. He showed utter and total ignorance of the Defense of Marriage Act, and of the nature of Islam. A couple of days ago, we rolled you this cub stumbling over the most basic gotcha question of all: “What’s a gallon of gas cost?”
The LA Times writes of the Breck Girl: “,” and proceeds to bash the South in a way that exposes these supposedly tolerant liberals as hypocrites. In the fog of love for Edwards, did everyone forget that he lost in Iowa? Did anyone notice that he failed to lay a glove on John F-ing Kerry? Kerry, whose Lurch personality was on full display last night, is the front-runner – yet nobody laid a glove on him! That’s totally unprecedented, and it won’t work for Edwards as it’s claimed to have worked for him in Iowa. Mark my words.