“What you’re going to see,” a staffer for Johnny “the Breck Girl” Edwards says, “is more and more stories about how Kerry is just reviled by his fellow Democratic senators and by others. The man is genuinely disliked for just being a big phony.” The staffer gives an 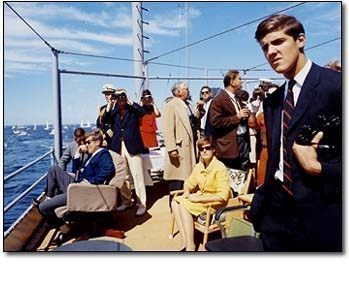 example of the Vietnam vets Kerry’s suddenly surrounding himself with, saying, “Almost to a one, these guys have said that they had reached out to Kerry over the years and never heard back from him. Suddenly he’s running for president and he’s all hot and heavy to use them to his advantage.”
The staffer closes with a charge that Kerry “just tries to ride other people’s coattails,” which dovetails with all the other stories here about how he’s a gigolo who gets wealthy by preying on single and divorced women who have inherited a lot of money, etc. The piece closes with a report that Kerry is preparing to ride the biggest coattails of all with the slogan, “A New Century. A New JFK.”
Oh, I hope they do that. Do you know how delectable that would be?