You Want Vietnam? Bring It On! 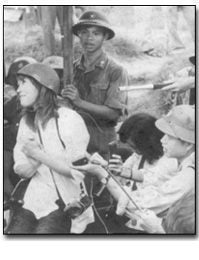 We’ll remind them that was John Kerry’s bunch, not George W. Bush. We know which party Hanoi Jane and Tom Hayden, et. al., belong to, and it wasn’t the Republican Party. So bring it on, Terry! Bring it on. You want to bring all this up, fine. You want to go out there and you want to attack George W. Bush, the commander-in-chief, in charge of the war on terror, fine.
We’ve got pictures of Jane Fonda in Hanoi. We’ve got pictures of Kerry throwing those medals of other people over the fence. We got Tom Hayden. We got the Chicago Eight. We’ve got all those people spitting on the soldiers when they came back. We’ve got all the Democrats calling them “baby killers.” We’ve got it all, if you want to bring it back up. And if you want, we can bring up Bill Clinton’s letters to Colonel Holmes saying he
“loathed the military.” And along with your votes to cut the CIA, and along with your votes to eliminate all these defense weapon systems such as the B-1 and B-2 bombers. Terry, if you want to bring this stuff up, feel free.
I think it would just be easier for you people, Terry, to admit who you are. You don’t like superpower status. You don’t like the military, and you don’t like the CIA. Why in the world you get so mad when people identify who you are? This is just, well, it’s easy to sit here and say, “It’s amazing,” but it’s not – but part of it is. That’s who you are. I mean, what’s so bad about being understood? A lot of people are going through life wishing people understood them. We understand you. You should be happy.