Who These People Really Are 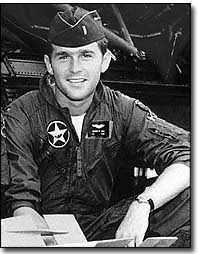 The Boston Herald reports, “President Bush vowed yesterday to release records proving his Vietnam-era National Guard service moving to stem the brewing controversy as Democrats raised new questions about his military chops.” They cite Kerry’s remarks on this issue lately, including lumping service in the guard together with those who dodged the draft. Kerry said in 1992, “It was not an issue to me if somebody chose to go to Canada or to go to jail or to be a conscientious observer or to serve in the National Guard or elsewhere” on the floor of the Senate.
AP’s Ron Fournier writes, “John Kerry, decorated Vietnam veteran questioned Sunday whether Bush had fulfilled he’s Vietnam-era commitment…” Don’t you love the press praising Vietnam all of the sudden? “…to the National Guard.” Kerry said, “Just because you get an honorable discharge does not in fact answer that question.” Monday’s Boston Globe reported Kerry saying he “respected Bush’s service in the Guard and noted that a whole bunch of people chose it as a way of sort of serving but not necessarily going to Vietnam.”
Kerry then “declined to take Bush’s word” that he fulfilled his guard service, and noted that his brother Cameron Kerry received a high lottery number in the draft and contemplated going to Canada. Kerry even sold out his brother to make himself look like a hero! You have to understand who these people are, and how they’ve chafed for decades over the fact that they are anti-strong military ? from Jane Fonda to Dukakis in that Beetle Bailey helmet. Now they’re sure they have a war hero, and they’re going to be the biggest hawks you’ve ever seen.