During a break Tuesday, I saw CNN’s reporterette come out of the briefing to be interviewed by their anchorette. The anchorette talked to the reporterette, and they put up a graphic which said, “Bush’s Military Record: Dems Attack Guard Service.” No, CNN, the Democrats aren’t, the press just did. The press attacked Bush. You are guys are passing it off on the Democrats. They are, too, of course.
Then on PMSNBC, they went to old Lurch, the Shar-Pei himself, and they asked Kerry, “What did you think about the White House response?” And an MSNBC reporter embed with the campaign said that Kerry said he didn’t want to comment, because it wasn’t an issue he created and its not his records they’re talking about. Man, this is Clintonesque. 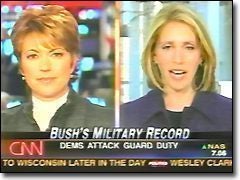 So I have some questions for the president about his military record. Sir, did you ever accuse your fellow Vietnam veterans of committing war crimes of mass rape and murder, of lopping off limbs and killing women and children? Sir, did you ever protest the war with the likes of Jane Fonda and Ramsey Clark? Sir, did you write a book with a photo on the cover mocking the Marines who raised the American flag on Iwo Jima? Why is that book almost impossible to find nowadays with that picture on the cover? These are the questions that will never be asked if there ever is a President Kerry. These are questions that ought to be asked of President Bush so he can say, “This is not about me. Shouldn’t we be asking this of Senator Kerry?” We can dream.
Terry McAuliffe is out there saying, “We sense that Bush is worried.” They’re all happy that Bush is worried. Terry, let me tell you something, a lot of us are worried. We’re worried about you; we’re worried about people in your party; we’re worried we’re not going to be safe if you guys succeed in taking the country back and placing power in your hands.