SOROS: I think he is hypocrite. 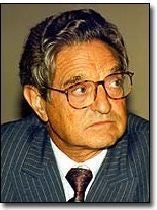 SOROS: Because money is still playing a very important role. Republicans have got a lot more than the other side. I’m not doing anything that the Republicans are not doing on a much larger scale. So now, that does not in any way conflict with trying to eliminate the influence of money, so I’m for reform, but then I play according to the rules which are prevailing. So the organizations that I donate to are legal, they’re transparent, and if people don’t like it they can change the law.
Isn’t this typical of a Democrat? They say they’re all for taking the money out of politics, because it’s money that’s corrupting. So they pass a law to do that and then they just find another route to get the money, a loophole in their own law, and then they say it’s totally legal. In answer to a follow-up question, Soros proves that he thinks that you are totally stupid. He sits there and says he’s not going to gain any access with this money he contributes. If he’s not going to have access, if his money doesn’t have any power, if his money isn’t going to have any influence, then why is he spending it?
If Soros were a Republican and finding alternate routes around McCain-Feingold to get money to Bush, he’d be creamed; he’d be the lead headline every night on the news. Instead, the Democrats just like with Clinton, marvel at how he is able to get around the law and still stay out of trouble. Let me bring you a name you may remember from the recent past, my friends: Richard Mellon Scaife. All Richard Mellon Scaife ever did was donate money to conservative organizations, think tanks and the like, and he was pilloried and skewered. They tried to ruin him simply because he was funding conservative thought centers and research organizations. They treat George Soros as a celebrity.