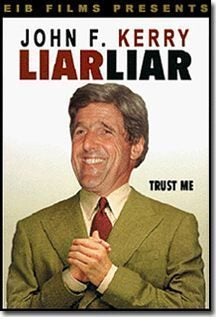 Hoffa made a big, phony baloney show about trying to get with the Bush people back in 2000, but these are union people who’re going to vote for Democrats no matter what. His appearance on Hardball was so ridiculous and outrageous that everybody on the set was laughing. He actually said that John Kerry is for drilling “all over the United States” like the Teamsters. When he said Kerry wanted to build the pipelines for the ANWR project without drilling there, Matthews asked, “What, are they going to run water through it?”
This is a huge insult to the intelligence. Kerry was one of two senators who promised to the ANWR bill! Kerry probably said this and Hoffa believed him. This insultingly vile stuff continues with the Reuters piece, “Kerry Says Bush has Forgotten the Real 9/11 Heroes.” Kerry: “I’m tired of these politicians who show up when the bagpipes are wailing and the flags are at half staff and they talk about heroes in America, and then when they go back to Washington, the flags are at full staff again, the bagpipes have stopped playing, and they forget.”
I get tired of hearing Kerry sing instead of speak, especially when he’s making accusations that are actionable outside of a political campaign. I mean, did we politicize World War II this way? I’ve not read any history on how everybody was talking about how we’d get rid of FDR, and how he didn’t care about heroes and was false and phony. Dean was saying things to get them revved up. Now it seems Kerry is moving in to take that ground with the Hate-Bush Crowd.