King Kerry Looks Down on Everyone

“A spokeswoman for the Massachusetts senator called Chambliss an attack dog for Bush and encouraged anybody who wants to debate Kerry’s military record to ‘bring it on,’ [the now famous] slogan of the Kerry campaign. Chambliss said in a conference call arranged by the Bush campaign: ‘When you have a 32-year history of voting to cut defense programs and cut defense systems, folks in Georgia are going to look beyond what he says and look at his voting record.’ Kerry planned a visit to Atlanta on Saturday night to campaign for the March 2 primary, one of 10 states choosing electoral delegates that day.”
Now, the Kerry response to all this is typical. It’s typical liberalism, and it’s not new with Kerry, just as nothing is new with Kerry. This is something you have to understand: if there’s a guy who is resorting to the Democrat playbook as well if not better than anybody, it’s John Kerry. I can remember myself all the way back starting in 1988 when I started this program all the way through the present, any time the defense budget comes up for discussion, I can predict and I will be right, I will receive a bunch of e-mails and phone calls from liberals who will say, “You? What do you know? You didn’t go to Vietnam. You had a chance to go kill commies, and you didn’t go, so what do you mean talking about the defense budget? Who are you?” 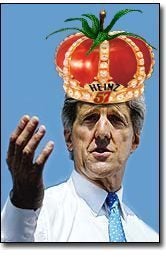 And Kerry is on the verge of bringing out the same thing. The Kerry campaign is putting forth this notion that, That’s basically his campaign. That is his campaign against Howard Dean, his campaign against Edwards. His campaign against Bush can be summed up. His slogan is not “Bring it on.” His slogan is, “Just who do you think you are? After all, look at me. I’m who I am and I’m great. Who are you? You’re a peon.”
The strategery here, the thinking is that how dare any of the 95% or more of Americans who haven’t served in the military question John Kerry’s voting record on military matters. You people realize here that Kerry and his buddies now seem to be saying that anyone who has not served in the military cannot legitimately question his voting record? We’re not talking about his service. We’re talking about his voting record, which is of course absurd, the whole point here. In fact, it’s offensive. It goes beyond being absurd. This is a standard that has never been applied in any campaign. It’s intended to immunize Kerry from serious questions about his extraordinarily weak record on national security.

This is how Kerry seeks to get out of answering questions about his voting record. This is how Kerry seeks to escape discussing it. “How dare you question me!” And that’s his attitude and reaction to everything. That is the attitude that John Kerry is attempting to project.
Now, I’m going to tell you something, folks. He’s not a likable figure. He’s not a likable man. He’s not a likable character, and it’s all going to come out in the wash. Least of all, don’t be intimidated by this. I don’t know that anybody is. I’m not saying that anybody is. I’m saying, “Don’t be intimidated.” And the Bush campaign responded. [Reading from AP:] “told John Kerry it ‘does not condone’ any effort to impugn his patriotism but asserted that Senator Kerry’s voting record on national security and defense issues is a valid target of political scrutiny. Responding Sunday to a letter in which Kerry accused President Bush of using surrogates to attack his military service in Vietnam and his subsequent opposition to the war, Bush-Cheney 2004 campaign chairman Marc Racicot said, ‘I ask you to elevate the remarkably negative tone of your campaign and your party over the past year.'”

Fought a little fire with fire. So here comes Kerry, deigning to write the president a letter: How dare you attack me with your surrogates and minions? Just who do you think you are! Get used to it, folks, because that’s who John Kerry is. And the Bush team fired back with: Your voting record is entirely on the table, and why don’t you tone down some of the trash that’s come out of your party, and your mouth, over the past year? And then Reuters has a story. Reuters is reporting this with the headline: “‘Kerry Defends his National Security Voting Record.’ Democratic White House front-runner John Kerry on Saturday forcefully defended his record on national security and drew a sharp contrast between his service in Vietnam and ‘Republicans who didn’t serve in any war.'”
Now, this is the guy who said in 1992 – and we’ve got the tape. We’ve got an audio sound bite of this. We’ll let you hear it, if I can find time to squeeze it in. This is a guy who…well, this is as good time [as any]. Let me find what number it is. Grab cut #5. Audio sound bite #5: Senator John Kerry on the Senate Florida February 27th, 1992. Here he’s talking about Bill Clinton’s lack of military service. 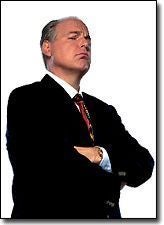 KERRY AUDIO: “We do not need to divide America over who served and how. I have personally always believed that many serve in many different ways.”
RUSH: This is 12 years ago. Now, going to the National Guard Kerry equates with being a conscientious objector and going to Canada. Kerry equates going to the National Guard with being a coward. Kerry equates going to the National Guard with avoiding service, basically. But there he was 12 years ago saying, [paraphrased] “Ah, we don’t need to be talking about this. This is unseemly. It’s beneath us all. People serve in many, many different ways.” But now all of a sudden Kerry is out there saying that Republicans have no right to criticize him, especially Republicans who didn’t serve in any war.
This is still all about the Saxby Chambliss comment.

The real thing to take away from this is that they got under Kerry’s skin. The old saw still applies. The attacks, they don’t bother you, bounce off, and you don’t respond to them. They’re not dignified with a response, but Kerry knows that he’s vulnerable on his voting record and rather than discuss it, and rather than debate, and rather than even try to explain it, Kerry is going to challenge the integrity of those who wish to bring it up, and he’s going to challenge their integrity by saying they didn’t do what he did. He went to Vietnam and they didn’t. They have no right, therefore, to talk about his voting record, because they’re not as good as he is, because they don’t know what he knows, because they haven’t had the experience that he’s had, because they are inferior people to him, John Kerry.
In this whole Reuters story, there’s not one word about any of the weapons system that Kerry has voted against – and there are scores of them. Kerry’s voting record in the Senate on issues of national security, they’re there for everybody to see, but Reuters didn’t care to point ’em out. What we see in Kerry’s voting record, by the way, is appeasement, pacifism, fatalism and defeatism. There’s no gray area. There’s no nuance here. There’s nothing that we’re not smart enough to understand, as Kerry wants to portray this.
You’re not sophisticated enough to understand my voting record. You weren’t there. You haven’t faced enemy fire. You haven’t been in a mud-covered foxhole. You haven’t done what I’ve done. You haven’t been the hero that I’ve been. You don’t know how to analyze my voting record because you’re not smart enough and you haven’t had the experience and you are not brought in diversity enough to understand my votes. Who do you think you are? The John Kerry slogan. But let me tell you, folks, there’s no nuance here. Kerry’s voting record is an appalling record on national security. Besides that, what is this crap that we can’t question it?
It’s nothing but pure excrement crap that we are not allowed, in his lofty worldview, to question his voting record. The question is, “Who the hell is he?” Who does John Kerry think he is? Just because he’s found a way to marry a couple of rich women, he’s better than everybody else? Is that why John Kerry thinks he’s better than everybody else? The fact of the matter is, folks, we’ve got a guy here who doesn’t stand out on his own without doing things like this. Anybody that has to tell you how great they are, has never been great. As I have said on this program repeatedly, greatness does not need to be defined. Greatness does not need to be explained, and greatness is not achieved by diminishing others, and in all of that I have summed up who John Kerry is. He’s an empty suit, folks, a tall one – and even at that we don’t notice him unless he steps on somebody.
END TRANSCRIPT