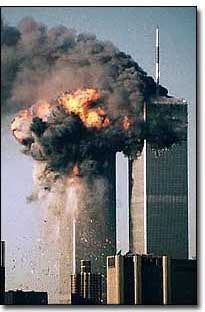 RUSH: All right, that’s a good question, but let me ask you, you’ve obviously thought about this. Do you have your own answer to it? Because when I answer questions like this there’s nothing left to be said. I want to give you a chance to have a say in it since you’ve asked the question. Sort of like my old high school chemistry professor. I’d ask what I thought was a brilliant question, he’d say, “Why don’t you give us a report on that tomorrow?” Which of course was my lazy way of learning. I have learned to do the same with callers, same thing the chemistry prof did. What do you think? Why do you think the anti-Semitism of, say, the Middle East militant Islamists is ignored, not considered a threat, not even discussed and yet here Mel Gibson makes a movie straight from the four gospels about the last 12 hours of Jesus, and the charges of anti-Semitism ring throughout the land. Why is that?
CALLER: You know, I think it’s the hypocrisy of the left that the agenda is not what’s really advertised. They will use whatever means necessary to push their agenda, which is to strip the traditions and foundations of this country, its Constitution and so forth, and if the charge of anti-Semitism against Mel Gibson will serve that purpose, because obviously they’re against Christianity in general in this country and religious people who support things like the U.S. Constitution and traditional American values. But at the same time, in terms of foreign policy and the other groups that are anti-American, it also goes in line with what they are trying to accomplish in this country.
RUSH: Yes. All right, those are all close. Those are all close. But when you mention anti-Semitism, that is a specific. Why is Gibson anti-Semitic? Why is this movie going to cause the, they say, rampant anti-Semitism? What is — first, something that’s amazing to me about this is, if you want to find anti-Semitism, let me name four countries for you to visit: France, Germany, Syria, Iran. If you really want to find anti-Semitism, go to those countries, talk to any of the people there.

Anti-Semitism in Europe is said to be at 1930’s levels. Who is it the American left in this country wants to befriend? The leaders of Europe, where the anti-Semitism is rooted. The anti-Semitism of Europe is rooted in the internationalist community, and the American left can’t to break bread and make friends with these people. The other element of this, or an other element of this anti-Semitic charge is really… [pause] I almost hate to say this, because some people are going to say I’m trying to diminish the seriousness of the charge. But let’s face it, the groups that charge anti-Semitism exist by virtue of fund-raising.
And fund-raisers, wherever they are, need to elicit or espouse fear. This is true of right-wing fund-raisers; it’s true of mainstream, moderate fund-raisers. Yes, there are moderate fund-raisers for the purpose of this discussion. Left-wing fund-raisers. These people, they don’t have jobs — except that their job is to keep the flock all, you know, gussied up so they’ll send money to the group that’s defending them. They’re making sure that nothing happens to them, and this is part and parcel of the American special interests. And they fund-raise. The third thing I would say about this charge of anti-Semitism is: It was made before the movie was even seen by the people who made the charge.
Now that tells me that they haven’t the ability to discuss the actual substance of the movie because they haven’t seen it. What they’re trying to do is discredit the filmmaker here by accusing him. This is a typical, typical trick that the left plays. I had it played on me for 15 years. They can’t deal with the substance of issues that, say, many of us believe in so they have to attack the credibility of the people who are said to be leaders or spokesmen for whatever the issue happens to be. So in Gibson’s case, he’s coming along and espousing the four gospels of the Bible.

Can’t have that, for a whole lot of cultural reasons. And for — look, the Bible, all religions — and this is the thing, all religions teach. Why do we have a morality, folks? Why? Why is anybody worried about it? Why does anybody care about doing the right thing as opposed to just doing whatever you want and let the chips fall where they may? Let’s cut to the chase here. We’re talking about immortality. We’re talking about the promise of life beyond earth, and it has been held out as a carrot that a certain type of behavior is required to achieve it.

Now, you get into deep theological discussions and the truly devout will tell you behavior has nothing to do with it because nobody can behave sin-free, and so a sin-free life cannot possibly be what’s necessary to achieve an afterlife, but still there are a lot of people believe it. We have morality for a whole host of reasons, and that’s just one of them. But the fact that we have a morality means what? It means we have to make judgments. And what do we do when we make judgments? Well, we say that’s right or that’s wrong. There are some people who simply do not wish to be judged, particularly in a religious context, particularly by people they think are no better than the characters from Deliverance — which is how you fundamentalist Christians are viewed by those who disagree with you.
You may as well all be the retarded people in the Deliverance movie. That’s how they look at you, and they’re not going to be judged by you. Screw you! You live in these little shacks making moonshine down in Georgia. You don’t know what life’s really all about, and for you to sit there — you illiterates — and for you to tell these people what hell and damnation and righteousness is? Screw you! Here comes the basis of your belief on the screen: The Passion. It has to be discredited. You can’t be right. Christians cannot be allowed to be perceived as right, because if they are, then others have to face squarely who they are, and they choose not to. 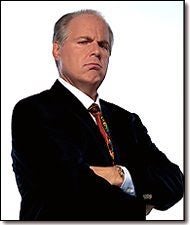 But the fact that they are content to bring it to your home or to take it to your home or to have you bring it inside your home, means that these are people that do not wish to be subjected to any of these judgments. And so, in order to escape the judgment, you have to discredit those who believe there is such judgment or values that underpin or underlie such judgment, and that happens to be the Bible. It happens to be — and the Old Testament, too. Let’s not leave… The Old Testament gave us the Ten Commandments. Has to do with religion.
You know, the religious right is said to be this and that and so forth. There’s a religious out there, and the religious left’s religion is there are no limits. There are no boundaries. And they don’t want to be told otherwise. And anything that comes along in universe — Hollywood is their universe — something that comes along that may be the biggest movie of the year in their universe, that may have more DVD and video cassette sales of any movie in history around the world is a huge threat and the guy who did it has got to be discredited so that the message in it can be discredited. That’s why they’re going after his dad. That’s why they go after him, before they’ve even seen the movie.

So, Mr. Snerdley, who thought that was just a brilliant monolog moments ago, nevertheless was alarmed, because during the commercial break, the EIB profit center time-out, Mr. Snerdley says, “I know what I’m going to get, thanks. I am the one that has to deal with these phone calls today, and I know what I’m going to get.” And I said, “What?” “I’m going to have to deal with people who are calling in saying, ‘Oh, you support what Gibson’s dad said.'” “No…”
Thank you, Mr. Snerdley, for the opportunity to clarify this, but I’m sad that it needs to be clarified. Mel Gibson’s dad didn’t have diddlysquat to do with the making of his movie. Ergo, the attacks on Gibson’s father, who’s 85-years-old, make as much sense attacking the movie as attacking me. I have nothing to do with the movie, and neither did Mel Gibson’s dad. But anything to attack the man responsible for making the movie by people who haven’t seen it. And by the way, let me be clear about something else. This opposition is the whole of the left.
I’m not subdividing them into one group is more opposed than the others or any one group more opposed than any other group. They’re all the same, and they all oppose it for the same reasons that I gave you in the previous segment’s monolog. You know, “anti-Semitism” is just a code word to the left just like, um, “homophobic” is or “bigoted” is or “racist” is. They’re all liberal code words to discredit conservatives, conservatives with whom they cannot win on a discussion of ideas or the issues. It’s all about discrediting the messenger, so to speak, and anything that gets them close to Mel Gibson they’ll seize any opportunity to do so even if they have to trick his father and set him up, which they have done.