CALLER: ?be a rough time for you guys after this.

CALLER: No, it’s not anger and rage as much as it’s disappointment.

RUSH: No, no, Derek. I didn’t mean that personally. The exit polls are clear, from Florida and 2000 and all. There’s a genuine anger.

CALLER: No, it’s not even Florida 2000. I think that liberals in general right now are disappointed in the direction that Bush has taken this country. It’s one thing to have somebody that has a different ideology than you. It’s another thing to see somebody and see the president that’s supposed to be representing your country take us down a path that is what is seriously detrimental to the future interests of the United States.

RUSH: Derek, I really applaud your effort, and I’m fortunate that you’re a liberal willing to have a conversation that calls me, but I really disagree with you. I think it goes far beyond Democrats being disappointed. I mean the exit polls are absolutely clear. The motivating factor is we hate Bush. Anger at Bush?

CALLER: I think we to want get rid of Bush. You’re not being fair in your definition.
RUSH: All you have to do is listen to what Democrats say about it, but look, you can argue about it all day and I’m not going to change your mind you’re not going to change mine. Let me ask you this question.

RUSH: Since Kerry is a vessel for this disappointment at Bush.

RUSH: Since Kerry is a vessel for all of the disappointment in conservatism and he really does not bring anything personally to the meaning. There’s no personal rah-rah, people are not electing or voting for Kerry because they love Kerry. It’s more here’s our guy and our guy can get the other guy out and we can get back in power.

CALLER: Well, anybody can do a better job than Bush.

RUSH: That’s not the question.

RUSH: I know you’re going to say that. Here’s my – what if Kerry – and this is a hypothetical, of course.

RUSH: What if Kerry actually bombs. What if Kerry ends up doing poorly? What if Kerry can’t defend his voting record? What if the Bush camp in the campaign is able to lay a lot of gloves on this guy and discredit him royally, take him off his game, can that hurt?

CALLER: Well, I think that the only real way it’s possible for the Democrats to lose this, and I don’t think that there’s any way that it’s going to be a sweep on the Republican side if Bush does happen to win, but what I would say is if Bush can find a way to get his base out, much more considerably than what I foresee happening, that would be really the only – the only reason why Kerry wouldn’t win. I don’t think that even if Kerry were to lose, you’re going to see a strong, strong Democratic turnout, and if Bush happens to win, I would make the prediction that we would see one of the largest turnouts in the history of our country for voting in this election. And I think that is possible that we will see one of the higher turnouts. 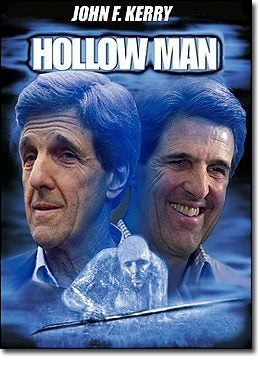 RUSH: If Bush wins it will be a big turnout?

CALLER: If Bush wins I think it will be a big turnout, in general. I think that by definition you’re going to see a massive turnout.

CALLER: We won’t vote with dead people, if you guy’s don’t let the Supreme Court decide this election, how’s that?

RUSH: The Supreme Court didn’t decide the election. This is what I mean. You guys can’t get over it. You guys have got to put that behind you, you can’t win with rage and anger. Now, I’m not going to convince about you that, let me ask you another question because time grows short. Who did you start out supporting in the Democratic primaries?

CALLER: I went back and forth between two people. Initially, before Wesley Clark got in, I was supporting Edwards. Once Clark got in I supported him, and then after he got out I’ve since gone to support Kerry. That’s?

I disagree with you, if Kerry gets dinged, it can hurt. I think you’ve got to have more than rage and anger – sorry – “disappointment.” You have to have more than a desire to trump the other guys, in order to win the presidency. You’ve got to have somebody who has a message, that is of substance, with ideas, somebody who has a vision, somebody who’s going to stick to it, and this is not present in Kerry. You have a man who is very hollow and disingenuous about a number of things, particularly his positions, and if the Republicans ding this guy, you talk about the base of the Republican… If you’re worried about Bush’s base not showing up, just keep marrying gay people. And the Bush base will show up in droves. The more states that legalize gay marriage, the bigger Bush’s turnout’s going to be and Bush won’t have to do a thing. You guys just keep being liberals and don’t worry about Bush’s base. I’ll handle that. It’ll be there. And your base is going to be the problem if Kerry sags, because if you guys – you can’t maintain rage, hate – sorry, “disappointment” – for all of these months. So you’ve got to have more substance than that. It’s still early. You’ve got eight months to go here. And if Kerry gets dinged, the air will come out of that balloon again and you guys are going to feel exactly like you did the day after the election in 2002. Only you’re going to feel that way in June.