Would FDR Run Those 9/11 Ads? is the headline, I saw that and I said hmmm… “It’s no mystery why President Bush and his campaign aides have fought so hard to establish the legitimacy of their TV ads that include scenes from the September 11th attack and the World Trade Center. When the commercials came under criticism from survivors of some of those killed by the terrorists, and also from some members of the firefighters union, Republicans rushed…” Have you noticed how often you see my name in the news? I mean, this thing in Madrid they’re trying to blame me for it, rush hour bomb kills blah, blah.

I’m sorry for the diversion. “When the commercials came under criticism from survivors, [blah, blah, blah] Republicans rushed to insist that the visual references were well justified by the significance of that day for the country and for the Bush presidency. The importance of their defending that proposition was amply demonstrated by the Washington Post-ABC News poll released earlier this week. Amid almost a dozen topics on which Bush had anemic and mostly negative ratings, one strong positive approval score stood out. By a margin of 63 percent to 34 percent, those surveyed applaud his handling of the campaign against terrorism.” 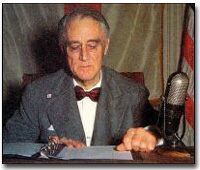 By the way, poll numbers since those ads ran for Bush are even better because they are viewed by people to have now engaged Kerry. “But is it, as supporters of John Kerry and other critics suggest, wrong for Republicans to convert the emotions of that national tragedy into grist for a political campaign? To answer that question, I went back, with help from Washington Post researcher Brian Faler, to 1944.”
Didn’t even credit you, Mr. Snerdley, and you did the original research on this. So he and researcher Brian Faler went back to 1994 “when FDR, almost three years after Pearl Harbor, was running for reelection.” Now, you and I know the story, but I want you to hear how the dean of Washington journalists writes about it.
“What you learn from such an exercise is that Bush is a piker compared with FDR when it comes to wrapping himself in the mantle of commander in chief. Item: FDR did not go to the Democratic convention in Chicago where he was nominated for a fourth term. A few days before it opened, he sent a letter to the chairman of the Democratic Party explaining his availability for the nomination.
“‘All that is within me cries out to go back to my home on the Hudson River, to avoid public responsibilities and to avoid also the publicity which in our democracy follows every step of the nation’s chief executive.’ But, he wrote, ‘every one of our sons serving in this war has officers from whom he takes his orders. Such officers have superior officers. The President is the Commander in Chief, and he, too, has his superior officer — the people of the United States. . . . If the people command me to continue in this office and in this war, I have as little right to withdraw as the soldier has to leave his post in the line.'” 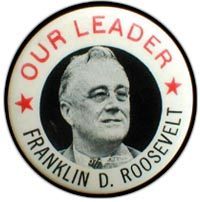 “Item: If FDR’s politicizing of his wartime role seems blatant, what does one say of the main speakers at the convention? Keynoter Robert Kerr, then governor of Oklahoma, declared that “the Republican Party . . . had no program, in the dangerous years preceding Pearl Harbor, to prevent war or to meet it if it came. Most of the Republican members of the national Congress fought every constructive move designed to prepare our country in case of war.”
So not only did FDR not show up, he addressed it from a naval station in San Diego and had his flunky accuse the Republicans of being ill-prepared, ill-equipped and unconcerned about the war.

“If you accept President Bush’s premise that this nation is at war with terrorism, then you have to applaud the restraint his campaign has shown so far in exploiting the attack that began that war.”
So Broder says, wow, Bush is not doing nearly what FDR did, but it doesn’t end there. No, Broder has to dig in the little knife, and he does. And he says, “Far better than criticizing his ads, ask why Bush is not calling on comfortable Americans to make any sacrifices for the war effort and why he refuses to raise the revenue to pay for what he calls a life-and-death struggle. Those are the legitimate issues.”
David, David, you should have quit when you were ahead. Just had to get the little dig in, just had to. You may as well not even have written the first 95% of the column.