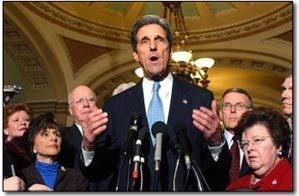 He tried to show what a tough guy he is, surrounded by all those Jurassic Park figures from the Senate – Ted Kennedy, Helmet Head Byron Dorgan, Daschle can’t even be seen, Barbara Mikulski barely comes up to Kerry’s waist (don’t infer anything) – and it’s just a sorry group of people. I don’t know what they’re thinking. Kerry has the delivery of Algore, the integrity of Bill Clinton, and the ideology of Ted Kennedy. He makes a crass statement about the president and Republicans as lying and crooked, and at his press conference, with the aid of sycophantic questions from the media, turns into a defense of John McCain’s record as a POW and his own liberal agenda.

This guy’s turning into a lightweight, folks. I’m 53 years old. I’ve been paying attention to this stuff since 1960. I’ve been hearing Democrats say we need health care; we need job training; we need education funding. We’ve been doing this for more than 40 years! It isn’t working the way we’re doing it, if we still need to do it. It’s a dull agenda ? and it?s intellectually dishonest, because Bush has given them most of their domestic agenda anyway! There’s nothing inspirational in it or any of this.
I’m going to predict it’s going to get worse. Kerry’s going to find out that this got him a lot of attention. He’s going to start saying this stuff publicly. He’s going to implode. We’re looking at Howard Dean without Howard Dean’s charisma or emotional stability.