Catching Terrorists Will Only Make Them Mad 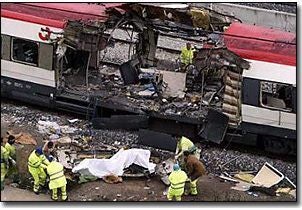 So anyway, I’m trying to stay on track here. I told you my eyes are rolling back into my head. So I’m watching this guy, this new Spanish shoemaker, who is the new prime minister over there, and they’ve got a graphic underneath saying they’ve got a lead here to an Algerian suspect in the 3-11 bombing, and I’m saying to myself, wait a second, are the Spaniards going to actually try to catch the people that did this?
Why would they do that? I mean, don’t they know that’s only going to make the people who did this even madder? If they go out and catch the people who did this, and then put them in jail or indict them or whatever John Kerry tells this guy he should do with them, that’s just going to anger Osama bin Laden and the rest of the Al-Qaeda guys around the world that are free. You can’t go catch these people. If you’re going to appease terrorists you don’t go try to catch ’em and you certainly don’t put ’em in jail you don’t execute them. If anything, you ask for a conference and you try to understand ’em, ask ’em, “why did you do this to us? We want to know why you hate us.” Seriously now, no, no, I know this may sound a bit flippant to you, but I mean, seriously. If the first thing this guy says is, “Next thing I’m going to do is go to America, meet John Kerry, and help him get elected there, and we’re going to pull our troops out of Iraq on June 30th.”

Oh, unless the UN takes over the rebuilding, did you hear about this? The shoemaker guy in Spain says that unless the United Nations takes over via resolution the rebuilding of Iraq he’s pulling his troops out of there and he says this is the wrong way to go about terrorism. And then we have this guy from the European Commission, Romano Rigatoni [Prodi], whatever his name was, and he said that this is the wrong way to fight terrorism. You don’t do it with force. So this guy is clearly seeking the Nobel Peace Prize. So what are the Spaniards going to do? Does it make any sense they would try to catch the terrorists? I’m not talking about Spanish people, and I want to stipulate here that the Spanish people are a different ball of wax. I’m talking about this one guy, this new prime minister.

You know, it doesn’t make any sense. Why catch these guys but not go catch others. I mean, you get my drift? Look it, I’m not just whistling Dixie here, no offense to those of you north of the Mason-Dixon Line. I’m not. I don’t understand why they’re going to try to catch these guys. I really don’t.
END TRANSCRIPT