Kerry Says He Voted For & Against Troop Funding

PRESIDENT BUSH: I’m George W. Bush and I approved this message.
VOICE: Few votes in Congress are as important as funding our troops in war. Though John Kerry voted in October 2002 for military action in Iraq, he later voted against funding our soldiers. 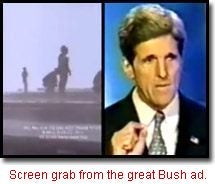 RUSH: I tell you what. Let me hear that ad again. The ad is just fabulous, and then we’ll follow with what Kerry said. We’ll explain all this. John Kerry arrives in West Virginia for a slam-dunk primary. If he’s going to West Virginia, folks, there’s something wrong here. He’s going to West Virginia, and he’s tied in polls in Pennsylvania, and you couple all the gaffes that he has made this week. This is a campaign in trouble, and they’ve called a halt to it, and he’s going to go out to Sun Valley where he has a — well, his wife has — a home next to George Soros, going to go out there for five days for some vacation time, try to retool this, and figure out how to proceed here without making himself look like Howard Dean II. And, by the way, Howard Dean has gotten back in the mix. Thank goodness for this. He said something just outrageous. He may as well have said that George Bush is a terrorist, with his latest pronouncement. All that coming up, and here’s this ad that sent Kerry off into a tizzy.
(Replaying of Bush ad.)
RUSH: Okay, so Kerry has to defend himself when he gets into the thriving metropolis of Charleston, West Virginia last night and has this to say at a town meeting.
KERRY: The Republican attack machine has welcomed me to West Virginia today with another distortion. I actually did vote for the $87 billion before I voted against it.

RUSH: He voted for the bill before he voted against it. He wants credit for doing both things! So, let’s take the opposition first. Let’s take this in reverse order. He actually opposed the $87 billion, and this $87 billion was to fund troop operations in Iraq once they were there, and he opposed the $87 billion because he wanted more countries to contribute and didn’t like the Bush plan. He said he “opposed the $87 billion package for Iraq because he disagreed with the way the Bush administration handled the conflict and wanted to enlist the help of more countries in securing the peace in Iraq.” All right, that’s why he voted against it.
So, then why did he vote for it, which he did? He said he voted for it before he voted against it. Well, he voted for the same bill because it would take tax cuts from the rich to pay for it, he thought. “‘They didn’t have the state-of-the-art body armor at the moment they went in,’ Kerry said, adding he supported an amendment that would have paid for the $87 billion by repealing tax cuts for the most wealthy Americans.” So, senator, where did the troops figure in any of this? You vote against the bill because you don’t like the Bush plan, and you don’t think there was enough foreign involvement. Then you turn around and you vote for it because you agree with an amendment that is going to fund it by repealing tax cuts for the rich. That’s his rationale.
Now, his answer, if he were sitting here, if I were talking to him, he would say, “Well, it’s obvious, uh, Mr. Limbaugh, that you don’t understand how things happen in the United States Senate, and I could understand that. You’ve never run for office. You never put yourself on the line. You didn’t go to Vietnam like I did! You don’t know what life is really like out there at the top. You don’t know what it’s like at the bottom. You don’t know how things work in the Senate. You have no right to question me! I’m outta here.” That would be his answer, but he wouldn’t answer it other than to say, “I voted for it before I voted against it.” Now, they had a discussion of this ad on Hardball last night. Chris Matthews and Andrea Mitchell, it’s audio sound bite number 3. Listen to Andrea Mitchell try to defend Kerry.

MITCHELL: Now that is a complete distortion, Kerry would say, and anybody who really covered the $87 billion supplemental has to agree —
MATTHEWS: Were those items in there?
MITCHELL: — it’s a complete distortion. They were in there but he was voting against one part of the bill.
MITCHELL: But didn’t he vote against finals? Didn’t he vote against finals
FUND: — trying to have it both ways?
MATTHEWS: Well, then he voted against all those elements.
MITCHELL: He voted against those elements in the supplemental, but he was voting against it as a protest, he said.
MATTHEWS: Well, that’s what he says. That’s his spin, but he’s nailed here, I think. By the way, you said before that was a hell of a tough ad.
MITCHELL: It’s a very tough ad.
MATTHEWS: I think it’s devastating.
MITCHELL: First of all it’s a simulation of a Senate vote.
RUSH: So? Most ads are simulations! Andrea Mitchell doing her best to defend Kerry. “Well, he said this. He said this!” and Matthews, “It’s just his spin. he voted against the final, didn’t he?” “Yes.” “Okay. I don’t care about anything else!” He voted against it, but he voted for it when he thought that tax cuts for the rich might be repealed in order to pay for it. So there you go Democrats; there you go, libs. There’s your guy. On another issue, he’s on both sides. He’s for it and he’s against it, and in this case, we still don’t know what he thought of funding the troops! We don’t know what he thought about actually that.
END TRANSCRIPT