So a couple days ago I got a note from him. His first name is Mike. I got a note from him, he says, “Could you find a way to get me some Bush-Cheney signs? I want to put them all up and down the road on both sides so when the press goes up to where Kerry is, they can’t help but see all these Bush-Cheney signs.” I said, “Well, I’ll work on it. I’m not part of Bush-Cheney campaign. I don’t know where to get these signs but we’ll see,” and he sends me a note today, said, “Did you see the New York Times story?” And I said, “Oh, yeah. It’s at the top of my stack.” What happened was Kerry went out to ski yesterday and on the first run, the reporters let him go alone just to get his feel for the slopes. It’s been a while.
The second run though, the Secret Service went with him and a couple of press and video cameras, and as he’s going down the slopes, Secret Service agent pulls in front of him, Kerry takes a spill, and the press says later, “We saw you fall out there. How was that like?” And Kerry said, “ Secret Service agent hit me and made me go down,” and then offered an expletive, cursed out the Secret Service agent sworn to protect his life! He’s cursing! While George Bush is defending the world and honoring those who join us in the War on Terror, John Kerry is cursing his Secret Service agent for making him take fall on the slopes!
I’m going to tell you something, folks. The FCC is getting real tight on this indecency stuff. We’re going to install a delay on this program for when we take John Kerry live. This guy can’t be trusted. He says the word F-ing in Rolling Stone magazine. He’s out there, “Liars!” You never know what he’s going to say. So we’re installing a special Kerry delay for whenever we carry him live because this guy is high off the reservation many times. And we’ll call it the Kerry F-ing Delay, or the F-ing Kerry Delay, and I know we’re going to have to use it. Anyway let me read you the latest note today from my buddy who wanted the Bush-Cheney signs who was a neighbor of Kerry-Heinz out there in Sun Valley.
He says, “After the story in the New York Times today hit about Kerry cursing out his Secret Service agent, I get this note, Rush. They had some poor city slob clearing a bike path of snow last night till well past midnight, which means you can look for the look-at-me-I’m-an-outdoor-biker photo from John Kerry soon. Why else would he be clearing a path? Obviously Kerry is going to take a spin on a bike in the middle of the snow.
I suspect he’s also going to go for the fly fishing photo as well. They had the Secret Service guys walking through the river yesterday afternoon checking whatever under the bridges and on the banks and so forth,” and then he says, “I hope that the Secret Service and this poor city slob didn’t leave a patch of ice for Kerry to slip on when he’s riding his bike, because if they did, and he falls riding his bike, we are gonna to hear the expletives all the way over at our house.” So we got a spy out there at the Kerry vacation central in Sun Valley, Idaho.
(COMMERCIAL BREAK 12:20)

I just sent my buddy out in Sun Valley, Idaho, another note. I said, “Hey, since they’ve cleared that path for a potential bike ride by Senator Kerry, why don’t you go out there and make sure that they didn’t leave any loose stones hanging around so he can’t stop and make a cross. You know, like Clinton did on the beaches at Normandy.” (laughing) (Rush on TV) Well, he’s replicating all these things that all these other Democrats have done, JFK and Clinton and others. My friends, I saw this today. I thought it was good that Kerry cursed out a man who would offer his to protect him, his Secret Service agent. But this is even better.
“Senator Kerry’s foreign policy advisor, Rand Beers, issued the following statement today. “It is simply not appropriate for any foreign leader to endorse a candidate in a America’s presidential election.” (laughing) “John Kerry does not seek and will not accept any such foreign endorsements.” (laughing) I’ll tell you, this about sent me to the bathroom. (laughing) I said, “What a week this has been! What a turn around!” I mean, you talk about offense and defense? Who is it that’s on defense? I mean, look what this voter started on Sunday in Pennsylvania with his question: “Name ’em. Who are these foreign leaders?” We’ve gone from “none of your business” to a press release to the world, “Don’t endorse me. Your endorsement will hurt me. Your endorsement doesn’t count. Shut up!” (laughing)
Now, has anybody endorsed him? Well, that’s the thing. This didn’t just come out of the blue. The statement came after former Malaysian Prime Minister Mahathir Mohamad. That would be Mahathir Mohamad, “an outspoken leader in the Islamic world — told the Associated Press yesterday that he endorsed Kerry in the presidential race ‘because he believed that Kerry would keep the world safer and listen to other opinions.'” Make it safer for the terrorists, is what he means! (laughing) We couldn’t write this. So they get an endorsement from a militant Islamofascist and they have to say, “Whoa! We don’t mean you. We’re talking about de Villepin. We’re talking about Schroeder. We’re talking about European socialists. We don’t want to get endorsements from you terrorists.”
And they had to really shut this down because what if North Korea reversed themselves and say, “We endorse Kerry, too,” and then what if… You know, there’s all kinds of communist regimes. What if Castro shows up and says, “I endorse Kerry”? The Black Caucus would like that, but Kerry wouldn’t. Folks, this is unprecedented. A Democrat president who is actively meeting with foreign leaders, and we had the story yesterday: Biden and Hillary out there meeting with these European socialists planning the world after they get the White House back. (laughing) Here comes his militant Islamofascist from Malaysia. “Hey, I endorse Senator Kerry, too!” (laughing) “We got to shut this down!” (laughing) Kerry goes out and curses out the Secret Service agent on the slopes of Idaho while on vacation while George Bush is addressing the issue that threatens humanity more than anything else.
That’s what makes you stop laughing. You know, I was thinking as I was listening to Bush’s speech here. You know, we’ve got some sound bites. I was thinking that you liberals, you really ought to hate terrorists. Now stop and think of that. The fact that I can even make this point — and, by the way, I used the line yesterday, last night, Mr. Snerdley. I said to the 850 people on their feet, I said, “The thing that we all have to understand here to put these last two years in focus, liberals in this country care more about whether European leaders like us than they do about whether terrorists are killing us.” Yea! (clapping) And so when you say, “Liberals ought to hate terrorists,” I say this from my heart. I say this intellectually. I say this because I don’t get the idea that they do.
They think that we can reach appeasements with them and understand them and they look for to explain why these people do what they do. But in truth you liberals, you ought to hate them. Why? Because terrorists have new use for nuances. Terrorists are not where you are. Liberals are right there in this middle ground where they’re skeptical of the difference between good and evil. Terrorists are not skeptical of the differences between good and evil. They believe in evil. To them life is life; death is death. And I’ve got a quote. They believe in death. George Bush used it in his speech today. Terrorists believe in death. We believe in life. Terrorists say, “We believe in death; you believe in life.” So there are no nuances in terrorism to understand, Senator Kerry.
BREAK TRANSCRIPT 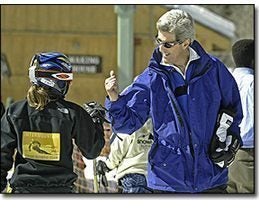 Senator Kerry, of course, hitting the ski slopes out in Sun Valley, Idaho. He’s on Bald Mountain&lt;/a>, by the way, for those of you who are skiers and are familiar with the region. I’m not. That’s where he was. In addition to being videotape taking a spill and then cursing out his Secret Service agent for causing it and telling the reporter, “” This man has issues, folks, here the reporter is [jokingly], “Senator Kerry, we saw you take a tumble!” “I don’t fall. You saw it. He tripped me! He got in my way,” and then uttered an expletive.
All right, so after that was all over and the wounds were healed, Senator Kerry and the boys sat down to lunch near some lodge, and there were members of the public there. And a few children were murmuring hecklers as well as supporters. A few children were murmuring, “George Bush… George Bush…” as Kerry walked by, and then Kerry sat down to his lunch, “a bowl of chili and a Power Aid energy drink totaling $9.10” here, it says. “A man in line for the ski lift said, ‘Hey, John, what world leader talked to you?'” So some guy getting on a ski lift: “Hey!” Not “Senator Kerry,” not, “Hey, Mister Kerry!” “Hey, John! What world leader talked to you?” It might have been my buddy for all I know that wants the Bush-Cheney signs on the road leading to his property which borders Kerry’s.
END TRANSCRIPT