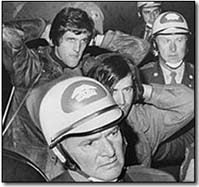 “A Bay Area historian on Friday reported the theft of three boxes of confidential FBI documents, some detailing government surveillance of presidential hopeful John F. Kerry when he was a spokesman for a 1970s veterans group protesting the Vietnam War.
“Gerald Nicosia told police that the theft occurred sometime Thursday from his home in Corte Madera, a Marin County suburb of San Francisco, said Sgt. Chuck Lovenguth of the Twin Cities Police Department.
“‘I don’t know who could have done this,’ Nicosia said Friday. ‘It could be somebody who saw the boxes via news reports and wanted a piece of the presidential candidate for posterity, like a piece of the Berlin Wall.'”
Who would want to cover up some of Kerry’s anti-war past? Hmm? Him! This is incredible. Here we are in the midst of the campaign, a guy has three boxes of FBI files on John Kerry stolen and we’re all scratching asking, “Gosh, who would have done that?” The owner can’t afford to say anything here, or they’ll steal him next.

Folks, I don’t mean to be rude or disrespectful here, but is there anybody who really gives a rat’s rear end enough about John Kerry to steal his files? Who cares more about that than John Kerry?