A Life You Can?t Imagine

North Korea finally allowed some pictures out after that big train wreck. North Korea is one of the most backward, archaic, dinosauric civilizations on the planet, and they are a very closed society. This little pot bellied dictator over there, Kim Jong ll, runs this place with just… iron fist doesn’t even begin to describe it. But they sent some pictures out because they are incapable of repairing this train track, this route. They’re incapable of repairing any of the damage. They don’t have an economy. The pictures of North Koreans trying to clean up the mess, they’re using tools from the twelfth century. They don’t have hammers. They’re using wooden picks, ox carts or some kind of beast carrying carts. It’s the most amazing thing. And I know this instinctively and I know that a lot of the world, maybe not the twelfth century, but a lot of the world is stuck two or three had an years ago; and these clowns in the Middle East want to go back to the twelfth century, and you look at this, and this is why I have such an appreciation for this country, why I just can’t get over how so many people take it for granted. 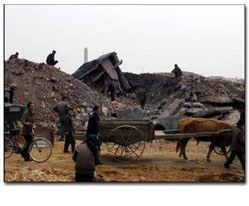 Maybe because they were born in this country and have never known anything else, but the prosperity and the ease of life here. I mean, just the physical ease of life, getting around, getting up, sleeping, having shelter, all these basics which we think are entitlements and we seek to build even nicer accommodations for ourselves, around the world there are people still living under straw, if they’re lucky to have that. And that is why I get so perplexed when I hear these anti-American types in our own country, people born in this country who hate it and don’t like it and consider us the evil in the modern world, and maybe they’re perverted and they look at these people that live in 12th, fourteenth century or thereabouts and think it’s our fault because we’ve stolen all the resources these people would have on their own if it weren’t for us and our selfishness, and I think they do think that. But they’re perverted. There is a way to spread this to the rest of the world, but you’ve got to get rid of these tyrannical, dictatorial communist governments, and you have to bring free enterprise markets to these countries where people can, as individuals, pursue excellence without restrictions and without shackles. And so many people in this world are shackled and imprisoned in their own cities, towns, countries, and homes.
We just take what we have here for granted. And then, what makes me even more in awe is when, given the prosperity in this country that we have, given all of the niceties, the pleasantries, the pleasures, the thrill-seeking opportunities, all of the things here that represent the greatest quality of life on earth, there are still people in this country who will leave it and go die for it. And I am in awe of it every time I think of it.

That is why, when I see these prison pictures from Abu Ghraib, I cringe at the idea that there are actually Americans who want to cast all members of the military the same shadow as those guards in the prison that committed all these atrocities. It offends me, and it makes me mad, because there are people that try to tear down the greatness of this country. And part of the greatness of this country is that there are people who volunteer to go endure hardships that you and I will never know, risk their lives so that all the rest of us can sit here in bliss, and just pursue our lives either aware of what’s going on in the rest of the world or not, doesn’t matter. And they are 18 to 24 years old, or in some cases older. It’s just mind-boggling to me.

It was all brought back home again when I saw some of these pictures out of North Korea. You wouldn’t believe them. I just saw them on television. It was maybe a week ago, but I’m just sitting there — I mean I knew it instinctively. I know it’s a backward communist country but they have no — there’s no hope. The people in that country cannot possibly have hope. The things they hope for, you would be insulted if you were told you have to face them every day. The things they hope for things that you’ve never had to undergo, endure, or experience. That’s what they hope for. And that there are people in this country who will volunteer to go to places like that, for those people, right now it’s Iraq and Afghanistan. It leaves me in awe. And that’s why I respect and love ’em so much. That’s why I cannot stand when a bunch of charlatan bigots in the Senate or the House or anywhere else in this country try to cast them in a negative light because of a few of them. It’s almost intolerable to me.
END TRANSCRIPT