I’m sorry. It can’t have been CNN because it was a CBS poll. CBS/New York Times &lt;a target=new href=”http://www.nytimes.com/2004/05/12/opinion/12KOHU.html”>poll&lt;/a>, and CNN doesn’t — well, it could have been. I don’t know, folks. Who remembers what they were doing two days ago on a holiday weekend? Anyway, it’s not good, and it’s buried deep in the internals of a recent poll, and it wasn’t reported, and it wasn’t dug deep for. So this is something that is also not playing out well, and, see, just as I said: one week after telling that you say they’re going to win the House. One week! It was today. One week ago today, they’re going to win it House; going to win the White House; going to win the Senate. They had such momentum there was no stopping them now — McFadden and Whitehead, 1976. (singing) “Ain’t No Stopping us Now&lt;/a>.” We had this story by Donald Lambro and the Washington Times, “Base Yet to Unify Behind Kerry&lt;/a>.”
Now, how does this happen? Is this media incompetence, too, or is this just the media doesn’t want to “cheerlead”? . I have to laugh at Mr. Pummer (of CBS Market Watch) saying that the media does not want to “cheerlead” (the good economic news). What have be they been doing for Kerry if not cheerleading, because if they’re not cheerleading for Kerry, he doesn’t exist. They have to be cheerleading for him, when they talk about him and talk him. [Lambro] “Democrats say they are more unified than ever in their determination to beat President Bush, but there have been desertions in the party’s ranks by antiwar activists who back…Ralph Nader and grumblings from blacks and Hispanics who say Sen. John Kerry has taken them for granted. The Democrats’ troubles with an often-contentious political base do not end there. Most polls show that at least 12% of all registered Democratic voters say they will vote for Mr. Bush, twice the number of Republicans who intend to vote for Kerry. ‘There is more unity in this election cycle than has ever been seen before, but that doesn’t mean that there is no disagreement and everything is hunky-dory. That certainly is not the case,’ said Democratic campaign strategist Maria Cardona.” 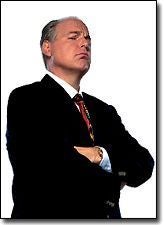 I don’t buy this. I saw this said the other day, too. You know, some Democrat on some television network talking about these primaries. “Why, we’ve never seen a candidate win this thing as fast as John Kerry did.” They cannot be serious. There is no energy behind John Kerry. All the energy is behind they hate Bush. The idea that Kerry is the most popular nominee of the Democratic Party ever just doesn’t wash, folks. It isn’t true; it isn’t there. Nobody is acting this way. Kerry doesn’t engender this kind of excitement, and yet that’s what they’re saying when they tell us, “We’ve never been this unified. We’ve never chosen a nominee this soon. Why, we set records. Did you see those primaries?” Yeah. They had to go begging for an audience to watch these primaries, where 10% turnout of Democrats in primary states is what was being counted and heralded as some huge big victory. Brian, what’s the matter with you in there? You keep staring? Ah. Oh. He got sunburned eyeballs. He got sunburned. You’re supposed to close your eyes. I thought something was wrong. You were blinking that something was wrong in here.

“No one knows yet how many anti-war activists who formed the base of Howard Dean’s army of supporters before his campaign imploded are backing Ralph Nader, but the consumer crusader showing some of his largest numbers in heavily Democratic states like Pennsylvania where he’s polling 8% of the vote. Other episodes of party disagreement have broken out in the last month, when minority leaders expressed their displeasure with the mostly white makeup of the Kerry campaign staff. Among them, last month, Raul Yzaguirre, president of the National Council of La Raza, one of the country’s most politically powerful Hispanic organizations, openly complained to Kerry that not a single one of your senior staff is Latino.” [Kerry sing-song voice] “Weeeell, you should come to my hoooomes&lt;/a> and look at the staaaaff there.” (Yzaguirre:) “Quite frankly, we find this deeply…” (clearing throat) Sorry, folks, I made that up. Sitting here having fun. (laughing) Something he would probably say. “Quite frankly, we find this deeply troubling and raise questions about the seriousness of your commitment to diversity.”
Ms. Cardona, who’s mounting a major Hispanic TV ad outreach drive for the Democrats has said there was a meeting the other night of Kerry campaign outreach staffers and Latinos. It seems things are on the right track now.” So there’s that, and then there’s this in the Washington Post today&lt;/a>. “In Democratic Strongholds in New Jersey, Voters Not Yet Sold on Kerry.” I’ve been telling you about New Jersey for three weeks now. New Jersey, as of today, is in play. If they (Kerry’s team) have to start spending money in New Jersey! Folks. New Jersey ought to be a state that they’ve locked up, but this is not good news for John Kerry.
“Eugene Bradley does not swing. At 50, Bradley, an operations manager for Synagro, a waste management company, has been devoted to the Democratic Party for as long as he has voted. But these days, when Bradley thinks of the November elections, he almost always thinks of voting against President Bush, rather than for Sen. John F. Kerry. He can let loose a torrent of opinions about [Bush] …but when it comes to talking up the Massachusetts Democrat who would replace him, well… He would like to like Kerry. He would like to sing his praises. He would like to feel — something — about him. ‘I am not that up on him,’ Bradley said. ‘I don’t feel a connection with him. He’s basically another politician. In my heart of hearts, I think they could have dug up somebody better.'”

Just the idea! They “dig somebody up.” I mean, Kerry looks like Lurch which is from the Addams Family which is a family that slept in coffins. They did “dig him up.” I called him in the TIME magazine story — did you see the TIME magazine interview, (Program Observer) Mr. Snerdley? Did you see that, Brian? The ten questions with Rush Limbaugh? It was good. It was good. Anyway, I called him “the charismatic dud,” and that’s exactly what he is. He doesn’t engender any excitement whatsoever. “I don’t feel a connection with him. He’s basically another politician.” He doesn’t connect. By the way, all joking aside, that’s an excellent way to describe his problems: “He doesn’t connect with people.” He really doesn’t, and that’s why I’m optimistic about this outcome, folks, because I think when it gets down to, you know, nitty-gritty time, people want to vote for. I know there’s all this anti-Bush emotion and it’s going to exist, but there’s not that much hatred in this country. This is another — just like the media is misreporting or underreporting the economy, they are over-reporting the hatred for Bush. Vastly over-reported it.
END TRANSCRIPT