CALLER: Okay, only a hypothetical anyway. But let’s say in the barracks, in my tent, wherever.
RUSH: Okay.
CALLER: Let’s just say… I’m a liberal.
RUSH: All right. Let me turn this around on you, Keith.
CALLER: I want to know why I’m bad for America as I’m putting — because I know that liberals are dying , just like conservatives are.
RUSH: Mmm-hm.
CALLER: So what I’m trying to figure out is —
RUSH: Yes?
CALLER: — what good are you doing for me by telling me that me and my are bad for America, and for the war against terror —

RUSH: Well, wait a second now, wait a second — I have a problem with your premise.
CALLER: Oh.
RUSH: Yes, because see, this is a neat little trick that the left is ginning up.
CALLER: Not trick. This is from me.
RUSH: Nooooow. Look, you guys all get the same stuff from the same websites. You all say the same thing. I mean, I’ve heard this already. My e-mail is overwhelming with this analogy.
CALLER: Well, maybe because —
RUSH: .
CALLER: Okay. Okay.
RUSH: I don’t accept the premise. I don’t say the words “liberals are bad for America.” What I say is, “ is bad for America, and liberals don’t believe it.” What I’ve said is that Saddam is bad for America, and liberals don’t believe it.
CALLER: I totally —
RUSH: “Liberals think that George Bush is more dangerous for America than our enemies.” That’s what I say.
CALLER: I’m a liberal, Rush, and I don’t believe any of those contentions that you’ve made. So then your premise would be wrong.
RUSH: Well —
CALLER: I’m a die hard liberal.
RUSH: Okay, if you don’t believe it, then you’re driving along in your Jeep and you laugh it off because I’m wrong! Be a man about it!

CALLER: Well, that’s —
RUSH: If you think I’m wrong, you laugh it off and be wrong about it. If the bomb goes off, the bomb goes off. You chose to be there.
CALLER: Right. Listen. I’ve been listening to you for 15 years.
RUSH: Thank you.
CALLER: And, you know, it’s been — I’m a regular caller. It’s been 15 years since the demise of the free — um, the, uh, the, um… The Fairness Doctrine, right?
RUSH: No, actually close. No, it’s closer to 20, about 18 years. 1986.
CALLER: Eighteen years, okay. Okay.
RUSH: You know what’s happened since the Fairness Doctrine was demised?
CALLER: I’ve followed it closely, actually.
RUSH: We’ve gone from 125 talk stations in America, to 1,400.
CALLER: Right.
RUSH: There are more liberals on the air and conservatives than ever before. There are more ideas being expressed than ever before. It’s the greatest thing that ever happened to radio and communications and First Amendment.
CALLER: And a good amount due to your entertaining and for some informative show.
RUSH: (Laughing.)
CALLER: Why do I listen? Why do I listen?
RUSH: I don’t know why.
CALLER: You know why I listen, because I want to know what my opposition is doing.
RUSH: Keep track of the “enemy.”
CALLER: Not the enemy.
RUSH: Don’t listen to what Al-Qaeda says; listen to what Rush Limbaugh says.
CALLER: You know, what I want you to know, though? Liberals for this country.
RUSH: Yes, they do.
CALLER: Every. Single. Day.
RUSH: In fact, you know what? You have not heard me condemn John Kerry’s military service in Vietnam.
CALLER: No… Well… I’ve heard —
RUSH: No you’ve not. You’ve heard me laugh that he won’t let us forget it, but I have not joined the chorus of people that condemn his service.
CALLER: And you know what, because — or Max Cleland for that matter. My bottom line is this.
RUSH: Well, why do you want to bring up Max Cleland?
CALLER: Let’s say —
RUSH: See, you guys are skating on thin ice when you bring up Max Cleland.
CALLER: The guy has no arms [sic?one arm, no legs]. For Christ’s sake, what do you want? What do you want? What better sacrifice could he give?
RUSH: I’ve never criticized him.
CALLER: others have.
RUSH: And what have they said?
CALLER: Oh, uhhhh, questioning his patriotism.
RUSH: Nope.

CALLER: I know you don’t see it that way.
RUSH: It didn’t happen. You’re talking about Saxby Chambliss and the Senate campaign —
CALLER: Yes, I am.
RUSH: — and that was on a vote about the Patriot Act but nobody “challenged his patriotism.” You guys, the reason why the left thinks that is because they know they’re on weak ground when it comes to patriotism, because they know the things that they say are dangerously close to being as having a problem with patriotism. So you’ve built up this wall and say you’re going to redefine patriotism as equaling criticism of America. You want “dissent and criticism of America” to equal “patriotism” so that you can be called patriots in your normal state, criticizing the country. I know how this game works. Suppose a conservative, a Jeep load of conservatives, is driving along in Baghdad, outside the green zone, and they’re fiddling around with their Armed Forces Radio Network tuning dial, and at the time their Jeep is out all they can pick up is NPR, and as they’re listening to NPR. 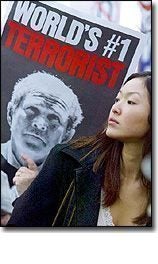 All they hear is about what a rotten bunch of people are in Iraq because of the Abu Ghraib Prison scandal. What do you think is going to happen to their morale? What do you think happen to their morale? This stuff all balances out. For every example, you can give me of some liberal soldier driving around hearing me. He’s got one hour of me; he’s got eight or ten hours a day he can listen to of NPR. He’s got more than his share. People don’t have top listen to it, either. So, you know, the notion that I say liberals are bad for America? That’s what you hear me saying but I don’t say it. I’m just saying you guys have got a proportion problem. You guys seem to always find America as the single source of blame rather than our enemies. You just heard Madonna (audio). I mean, Madonna is much closer to what the left in this country is saying and thinks and acting than anybody else is. “Bush, Saddam, same thing.” Look at the leftist protesters. You’ve got “Bush equals Hitler” all over the place. We don’t make this stuff up, and that’s all I say. I mean, it bothers us that you can’t recognize our enemies are our enemies and our friends are our friends. So be it. I’m glad you called, Keith. It’s always a pleasure.
COMMERCIAL BREAK
(Janet Jackson bumper music) Uh, ladies and gentlemen, you know, this business about liberals being bad for America. I’ll tell you what. Liberal ideology is dangerous for America. I mean, there’s no question. I clearly have said this over and over again, and I’m not backtracking from it, but I’ve never called them “-American” or “challenged their patriotism.” All I’ve said is the truth. Liberals cut the defense budget every time we’ve been preparing to fight a war against Al-Qaeda. Liberals undermine the CIA at the very time we should have been strengthening the institution to fight Al-Qaeda. The liberal representatives in Congress, as I speak, seek to undermine the war effort with committee hearings aimed at the besmirching the war effort, our troops and our commander-in-chief. There’s no question that’s what this is all about. This is an effort to derail the war effort, in a political sense, to hurt George W. Bush and to set up grounds for impeachment if he wins reelection.
Liberals today put their pursuit of power ahead of the national interest. Whatever mess they make, they’ll fix it in their own image when they get their power back. This is why 400 liberal professors yesterday &lt;a target=new href=”http://www.signonsandiego.com/news/politics/20040616-1517-kennedy-impeachment.html”>called&lt;/a> for the beginning of impeachment investigations against the president and his top advisors. liberal professors demand impeachment investigations begin, and then we’ve got all these ex-State Department people claiming that Bush is ruining our foreign policy. &lt;a target=new href=”http://www.etaiwannews.com/World/2004/06/18/1087523893.htm”>(story)&lt;/a> These are all liberals. It is patently obvious to anybody that wants to be objective why they’re doing this, and it certainly is not to assist the effort in which the country finds itself. Randy in Brunswick, Georgia. Hi, welcome to the EIB Network.

CALLER: Heeeey, good afternoon, Rush.
RUSH: Yes, sir.
CALLER: Hey, you know, I had a 23-year career in Armed Forces Radio. I can’t imagine a better way to have ever had a career in broadcasting. A blast. I lived in eight countries over 17 years of it, and I must say, in the tail end of my career when I was at broadcast center north of Hollywood they were going to bring in Rush Limbaugh’s show at the tail end of, you know, middle part of ’93 —
RUSH: Yes.
CALLER: — and I was just shocked. I was a big screaming liberal. I’d had all those years of the teletype machines and UPI and AP and didn’t know I had really probably been profiled a little bit by the posture of that particular news media, and so I was very anti-Rush. I said, “Oh, my God these troops overseas, remote areas, defending our freedom and they’re going to get propaganda like this,” and I was very upset.
RUSH: (Laughing.)
CALLER: But at the time we didn’t have the Internet. We didn’t have all the news sources we got today where people can go out there and kind of look around and find, and I really as I’ve stepped back and watched it over the years and flipped to being a strong conservative here in south Georgia. I’m very impressed with your work. I’m very jealous you’ve had such a great career in radio. Damn! I’m working in a federal office and saying, “Man, I sure miss those days on the radio,” and now that you’re all over the world talking about to our troops — and the troops — I’m just very proud of what you do.
RUSH: Well! Well!
CALLER: (Chuckling)
RUSH: You’ve made my day! You’ve give me a great sendoff here, Randy. That’s very nice to say. I appreciate that.
CALLER: Well, you know —
RUSH: It was Armed Forces Radio. You’re hearing me on Armed Forces Radio that started to change your mind about things?
CALLER: Yes, it was. You know —
RUSH: Well.
CALLER: — and it took a long time —
RUSH: This is what the left is scared of, by the way.
CALLER: I used to seethe listening to you driving to work, but over time, especially since 9/11, especially since it’s time for somebody to get whacked over there and quit playing games and trying to get along with them, and what’s going on today with this — looks like our guy in Saudi has been killed, and the Berg stuff and everything. I’m just very upset. If they think these people are playing around with us, we’re really messing up. There’s a lot of great people all over the world, and I love the world, served a lot of years in it, but I was real shocked that these governments in some of my favorite countries kind of stuffed us over the last couple of years.
RUSH: Randy, I’ve got to run because of time. I wish I didn’t. But I appreciate it. Thanks so much. Great to hear from you.
END TRANSCRIPT