The EIB Network: A Disease for Liberals

RUSH: I mentioned this earlier in the program. This is everywhere. This story is literally everywhere. It is just amazing. Well, it’s not amazing. Doesn’t surprise me. It really doesn’t surprise me, I guess it does a little or I wouldn’t be saying this cow. This is a story that’s not new. This goes back to before I went to vacation. Remember when I told you that Senator (Tom) Harkin (D-IA) attached a sense-of-the-Senate resolution to the defense appropriations bill, which was designed ultimately to get this program one hour of which (is on) taken off of Armed Forces Radio? All right, so it was there. It’s been attached forth and so on. I go on vacation last week and I come back this week, and the story is back, and when CNN ran the story the week before last, and they said, “Aaaah, it’s just a tempest in a teapot.” Remember that? Wolf Blitzer did the story. “It’s not big deal. It’s just a sense-of-the-Senate,” and I called Senator Stevens (R-AK) and he shared with me what it said and talked about it a little bit. I come back and here it’s gotten started all over again, and it’s everywhere. 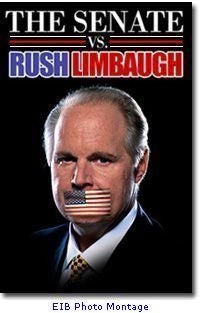 How do I know it’s everywhere? Because I have ways, ladies and gentlemen, I have ways of searching my name on the Internet. You would not believe. This story is literally everywhere. I’m getting hits on this story from little TV stations in Biloxi, Mississippi, from all over the country. I, so far, have gotten about 75 hits on this story just yesterday and today, “Liberals Seek Limbaugh Antidote on Military Radio — Lawmakers used to wrangling over troop levels and weapons systems find themselves in a dispute over whether military personnel abroad should be given more of a liberal antidote to conservative commentator Rush Limbaugh.” Now, obviously this means that I am a disease. Now, if you follow the timeline on this, the liberals have been seeking to emulate me for who-knows-how-many years, and every year o4 every month they think they found their version of me. First it was Jim Hightower; then it was (former New York) governor Cuooomo. Again, that’s the way the REVerend Jacksnnn pronounces his name. And then it was Gary Hartpence and then it was…

You know the long list, and nobody seems to be able to pull it off. The latest incarnation of me on the left is Michael Moore. “Well, we’ve got our Rush Limbaugh now!” But yet I’m a disease. They need an “antidote” to me on Armed Forces Radio. Make no mistake: What Tom Harkin is trying to do is not get liberalism on the Armed Forces Radio Network because it’s already there. It’s all over the place on Armed Forces Radio (schedule) and I’m not being critical of Armed Forces Radio. Don’t misunderstand me here. It’s all over the place. They carry almost the whole broadcast day of National Public Radio, and they have plus some of the talk shows on National Public Radio. They’ve got a cross-examination section of what you can find on radio in America. That’s wait it’s put together. This happens to be the most popular radio talk show in America by far, and yet only one hour of it appears the first hour on the Armed Forces Radio TV network, and yet all of NPR is out there.

Do you see Republicans launching an effort to get NPR thrown off? No. We’re not into censorship. By the way, this is not a private business deciding they don’t want to carry my show on local radio stations. This is a United States senator who is trying to introduce — did introduce, attach a sense-of-the-Senate — it’s not an amendment. It’s a sense-of-the-Senate resolution that demands balance on Armed Forces Radio Network, that I should not have this free and unfettered access that I have. Now, this is only been the case since 1993, and Les Aspin, who was Clinton’s defense secretary back then, is the guy who did this, because I was asked for by the troops. They took a poll. In fact the armed forces network produced a ballot, and they had a number of people on the ballot in terms of radio and TV shows and they asked the troops worldwide, “Who do you want that we don’t at present carry?” and I won it in a write-in. My name was not on the ballot, and there was a little bit of reluctance on the part of the Clinton administration to accede to the request by the troops but a little pressured applied on my TV show got it done and Les Aspin came on and he talked about it with us and he was a very nice guy and so one hour has been out there.

No problem. Everybody’s been fine, hunky-dory with it, and all of a sudden this stupid little website (EIB Story) that’s now claiming to transcribe my show — which I do anyway and put it on my own website — has now gotten everybody all upset and think that it is unfair and got Senator Tom Harkin in league with what essentially is not a website. It’s a Democrat 527 organization disguised as a website, and so now there’s in sense-of-the-Senate resolution attached to the defense appropriation bill. A United States senator! Now, this is what borders on censorship — and now the story. There’s nothing new since two weeks ago. There’s nothing new on this story. Nothing else has happened. Well, one thing has happened. I take it back. One thing has happened, and that is — and I could not have a better man in my corner — Texas congressman Sam Johnson, who was a POW in Vietnam. He was a first fighter ace over there, biggest fighter ace in Vietnam. He’s a genuine American hero, and he wrote a letter to Duncan Hunter, a congressional representative from California who is the chairman of the House Armed Services Committee because Harkin, this Senate appropriations bill would have to go to conference where, you know, things could be added, taken out and the Senate and the House have to agree.

(Reading from AP) “Sam Johnson sent Duncan Hunter a letter saying, ‘This amendment is absurd, and we respectfully ask you to oversee its removal.’ Johnson said American Services Radio has plenty of programing to counter Limbaugh, including the talk show of Jim Hightower, “which they got commentary they play all over the day.” Larry Sichter, an American Forces spokesman, said the service’s radio balance ‘is in the totality of the programing,’ and this is another thing I talked about this over the years about how balance… Let me just give you an example. He’s making a good point here. He said, “You have to look at the whole 24-day to look at our balance. You say I’ve got an hour of Limbaugh and what follows it.” The reason people are screwed up with balance is because of the media. Look at these cable shows. You could not have a show like this on cable; they wouldn’t put up with it, because in the middle of a show like this we’d have to have some liberal on to discuss whatever it is I’m saying so there would be “balance” just to keep people off their backs. So cable and traditional broadcasting balances as they go.

If you’re going to have a topic discussed, if you’re going to have a guest you better get both sides and that’s what they call “balance.” Well, my view of balance is this little three-hour program for the longest time was equal time to all the rest of the media, both radio and television. That’s why I said, “I am equal time. They don’t need to balance me. I’m the balance!” Well, now, all of a sudden the tables have been turned, and one our, one hour of the Armed Forces Radio Network is now the focus of the United States Senate, in the Senate appropriations bill and so Sam Johnson says, “This is absurd,” and is asking Duncan Hunter in the conference to take this out. There’s nothing going to be done on this until July when they come back and start new with it. Senator Harkin said, “Liberals moderates and independents contribute to funding for Armed Forces Radio through payment of their taxes just like conservatives do,” and so he wants either “balance” or my program taken off. Now, again, it is absurd to say there’s no balance on Armed Forces Radio. If they don’t want to be honest about what NPR is, then that’s their problem, but it is what it is. But the story now is the new lead has me as a disease, and they need “an antidote.” Well, let me tell you something about EIB. (Tapping desk) There is no antidote to EIB. EIB is the cure. EIB is an airborne phenomenon spread by casual contact and once you get it, you’re well! EIB does not make you sick. EIB is the antidote. There is no cure necessary for EIB, because EIB is the cure.