BEGIN TRANSCRIPT
Who’s next on this program? Lucinda in Johnstown, Pennsylvania, hi.

CALLER: Hi, Rush, I’m so thrilled to be talking to you today. I just wanted to tell you about the rally in Johnstown, Pennsylvania yesterday for President Bush. Cambria County, Pennsylvania, largely Democrat county, and I stood around and made some observations there and the Democrats just aren’t getting it this election. They aren’t getting it. I saw firefighters and first responders to the flight that went down in Shanksville, and they stood there proud of themselves, what they did that day. I saw firefighters and coal miners that were there, nine for nine, when we had the coal disaster here in Johnstown just a year and a half, almost two years ago.

CALLER: They’re proud. It’s a proud time. We are proud of our country, the direction we’re going. We don’t want you to find us jobs right now. That’s not what this is about. This is just a time where I just saw people very, very proud of their president, proud of what they do to contribute, and they don’t have out a cup right now asking for help. That’s not what they’re thinking about. They’re thinking family and home and what I can do to make a difference.

RUSH: How big was your group? It was a big crowd?

CALLER: There were 5,000 in the seats and then the floor was just packed.

CALLER: And again on the news last night, of course, it was the Philadelphia rally where five protesters were removed, the Johnstown rally again with a Democratic county and here we are, no protesters. I think Bush was completely overwhelmed, in fact, by his reception at that war memorial yesterday.

CALLER: He doesn’t. He just is so genuine in person. He’s so genuine. And that so resonates. He doesn’t look down at that speech. He’s just talking to you, and he’s talking about family and pride in our military, and he’s not saying the war in Iraq is any different than the war on terror, and people believe that and they know that to be true, and it’s just a prideful time right now, and he’s speaking to that.

RUSH: While this is going on, the Democrats are spreading forged documents around.

CALLER: I’m thinking of the genuineness of the people. And again, I looked around, Rush, and my heart was just so full of pride. I mean the men that were helping to pull the coal miners out, and the first responders in Shanksville, Pennsylvania, a teeny little place where firemen, volunteer firemen that went there and secured that scene and guarded that scene. 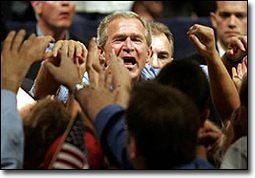 RUSH: Yes, but a question. If I were John Kerry, and you were talking to me. Let’s say I’m John Kerry guest hosting the program today, and you’ve called and you’ve said about this, you know what my response to you would be?

RUSH: After hearing you say that they weren’t asking for handouts, everybody was happy and so forth, I would try to get you talking your lack of health care, everybody else’s lack of health care; I would try to get you focusing on negatives and your life and so forth. And you know [Kerry impression] “Well, what aboooout your health caaare situation? I know two tooooo many people out there don’t have health care, whaaat about that?” What would your answer be?

CALLER: Right now my situation is I don’t have that as a problem in my life and, you know, I’m not going to go there —

RUSH: [Kerry impression] “Well, why do you like Bush? Bush hasn’t gotten you health care, and I will, vote for me.”

CALLER: — job to get me health care. I don’t want big government. This is just me speaking personally. I don’t feel that’s — what I pay my government for —

RUSH: You made my point. I appreciate the call out there, Lucinda. I’ve got to run because of time. But see, ladies and gentlemen, this is not a staged call. We don’t do that here. I said the other day. Health care is not this big issue. It never has been the big issue the Democrats think it’s going to be. And it showed up at 18% in some issue-preference poll the other day, like in fourth or fifth place. Lucinda, I appreciate the call, thanks much.
END TRANSCRIPT