They wrote this: “We wish this Presidential election had nothing at all to do with Vietnam. There were good people who served and good people who didn’t, good people who supported the war and good people who protested it. What happened really shouldn’t be an issue more than 30 years later unless you lie about it. So why do the Democrats keep bringing Vietnam up, and to their own detriment? John Kerry, for starters, has made his four-month service in that country the centerpiece of his campaign. But just last week his staff was forced to admit the senator had been inaccurate, to put it charitably, when he claimed on multiple occasions to have spent Christmas Eve of 1968 in Cambodia while (he also said) the U.S. government was lying about his presence there.”
Turns out he was lying. “Now comes Tom Harkin. On Monday the Iowa Senator lashed out at Dick Cheney, claiming the Vice President had no right to criticize Mr. Kerry’s policies for the war on terror because Mr. Cheney had a deferment back then. Said Harkin: “When I hear this coming from Dick Cheney, who was a coward, who would not serve during the Vietnam War, it makes my blood boil.” 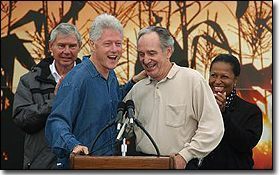 ‘Coward’? Such a comment would take coming from anyone. But Senator Harkin is a proven [liar] when it comes to his own Vietnam-era record, as shown during his own failed 1992 presidential bid. Consider this excerpt from a Wall Street Journal news story by James M. Perry from December 26, 1991.” We quote:
“‘In 1979, Mr. Harkin, then a congressman, participated in a round-table discussion arranged by the Congressional Vietnam Veterans’ Caucus. ”I spent five years as a Navy pilot, starting in November of 1962,” Mr. Harkin said at that meeting, in words that were later quoted in a book, Changing of the Guard, by Washington Post political writer David Broder. ‘One year was in Vietnam. I was flying F-4s and F-8s on combat air patrols and photo-reconnaissance support missions. I did no bombing,'” said the peacenik Harkin.
“‘That clearly is not an accurate picture of his Navy service…. Mr. Harkin’s Navy record shows his only decoration is the National Defense Service Medal, awarded to everyone on active service during those years. He did not receive either the Vietnam Service medal or the Vietnam Campaign medal, the decorations given to everyone who served in the Southeast Asia theater.’
“It turned out Mr. Harkin had not seen combat and was stationed in Japan. What’s more, Mr. Cheney isn’t the first Vice President to fall victim to Mr. Harkin’s acid tongue. In an editorial in 1988, we quoted ‘Senator Tom Harkin who served in Vietnam’ (we thought at the time) saying of his Senate colleague Dan Quayle, who did not serve in Vietnam: ‘It’s so ironic; they get in Congress or the government and become big hawks. Don’t they have any shame at all?’
“Mr. Quayle, to refresh memories, spent late August of 1988 taking flak…for having served in the National Guard, which was deemed by Harkin Democrats as somehow less courageous than either service in Vietnam or outright draft avoidance. One would think that the post-1991 Tom Harkin would know better by now than to assail anyone else’s Vietnam record,” since he lied about his own. He was never there! He was in Japan! “As for our media colleagues, is it too much to ask that they finally take notice of which party is responsible for keeping Vietnam front and center in our presidential campaigns?”
It’s the Democrats.
END TRANSCRIPT