Rangel Votes Against His Own Draft Bill! 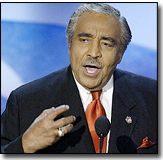 Charles Rangel is voting against his own bill to reinstate the draft. Now, if this story persists after today — I don’t even know why I’m saying it, we know it will, and we know why it will. It’s because there’s a transcript service out there that’s operating under the guise of news media. All right, I had to share all of that with you.
END TRANSCRIPT