As if an October Surprise weren’t enough, two or three of them, president won despite the November Surprise, that’s what I’m calling the exit poll results, the first wave. It’s just — I don’t know. It was just incredible to watch all this unfold yesterday, and as a result, folks, there’s an obvious temptation to gloat. There’s so much to cheer, gloating seems fine, I’m not really inclined to gloat, though. Look what we learned. I’m more happy than I want to gloat. I understand the desire to be jubilant, go ahead and be jubilant, but don’t go nah-nah-nah-nah. Don’t do it, don’t descend to that level, Mr. Snerdley. You know, after these two years, look where we are, and look how we did not descend to their level in order to attack them and to beat ’em. I mean, if you want to gloat, Mr. Snerdley, you go ahead and gloat. I’m not going to gloat. Look at what we learned. Character counts.
Did you see — if we can believe it from the exit polls — that the vast majority of people said that moral issues are most important? You ought to hear the liberals on that, folks, they are panicked, they don’t understand this morality business. Most Americans voted on the issue of morality, and Bush got 75% of those votes. They are in a tailspin today. Character does count. Our nation does have a moral center. That which we know as the American spirit cannot be bought by a billionaire or even five billionaires. It cannot be manipulated by October Surprises, it can no longer be controlled by the mainstream media. America is still America. It has not been remade in the eyes of the mainstream media or the American left. Quite the contrary, it’s moving away from that. 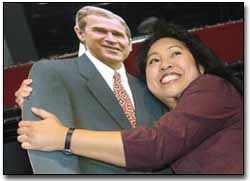 Two things. We’re moving away from them and they are retreating from the country. They don’t know it. They don’t have the courage yet to admit the reality that they face. They can’t admit the reality of a good economy when they see it. They can’t admit the reality of a terrorist war that we are in the midst of. They cannot admit the reality of a changing electorate’s overall character and moral attitude. All they can do is fight it, all they can do is object to it. Until they’re able to admit the simple realities that they face and understand what they mean, their efforts to fix themselves will be useless and futile and they will descend even further, without help from us. But we will be helping all the way speeding their retreat. But even if we didn’t help, they’re on a spiral down and as I’m reading them today, “We’re so divided, and Bush has to do something about–“
Hey, it’s just the exact opposite. We are not divided. The people divided in this country are the elites on both coasts and the media, they are the ones divided from the rest of the country. They think they speak for the whole country. It is the media and the left’s agenda which is failing, has had the brakes put on since 1980, ladies and gentlemen. It’s been a long continuum. This actually started back in the fifties, finally got some power with the Goldwater campaign. It’s taken a long, long time. It has had various stages where it’s advanced a pretty good clip, 1988 would be one of those stages when this program began. That began the destruction of the monopoly of the mainstream media and never again will they get it back, no matter what.
END TRANSCRIPT