CALLER: Yeah, and Democrats haven’t demanded that their leaders come around, either, if they believe —
RUSH: Well, but they don’t believe… Well, but they’re more likely to switch parties. I think one of the biggest things that’s going to happen here, you talk about the electorate, I think it isn’t going to be long before Southern Democrats learn what their party leadership actually thinks of them. They’re southerners, too. They may as well be hayseeds and hicks. Even though they’re Democrats, they may as well have gun racks in the back and run around wanting to shoot geese all day long and be a bunch of hicks talking about God and such things. I think that’s one of the problems Democrats have. It isn’t going to be long before southern Democrats finally figure it out: It’s not just Republicans that Democrats say these horrible things about morality-wise. It’s also these Southern Democrats.
When Bob Beckel talks about, “All right, the south? We’ve taken care of slavery. The South should go ahead and secede and form its own nation,” he’s including the Democrats in that because he’s talking about a geographical region. He said this on Fox yesterday morning, or yesterday afternoon. Now, your overall larger question: If the Democrats lack a value base or if they don’t have a central belief in a definable morality, if liberals don’t, then how are they going to possibly move to the center and fix their problems? That is a really good question because I think what’s at the heart of this — and this has been the case most of my adult life, certainly from late 70s to the 80s on. I think one of the central lines of demarcation between left and right in this country has been the utter… How do I put this? The desire on the part of many on the left that there be no common morality. They say of morality, when they say, “You don’t have the right to impose your religious values,” what they really mean is, “You don’t have the right to impose your morality on me. You don’t have the right to tell me what’s right and wrong. If you want right and wrong for yourself, fine, but keep it to you; you can’t tell me that what I do is wrong or right because it’s none of your business,” and so there’s no universal definition of morality that works for them. Morality to them is an individual choice, and they feel very intimidated when people who do believe in, you know, a black and white morality begin to talk about it because they feel like they’re being judged and it’s going to be imposed on them against their will, and that’s why they start talking about Hitler and fascism and so forth. Because they think all is going to be imposed on them, and they want a free rein because they want to be guiltless as they run around and execute their lives and live their lives and do whatever they want to do. They don’t want to feel any guilt about what they do and having a definite moral code or a morality — which of course, the Ten Commandments is the root of our morality, or one of them — you got a problem because people just don’t want to have that imposed on them, to be free to ignore it.
I think there’s a major fundamental element between the ideological difference between the two, the left and the right, and so, yeah, how is there going to be a common ground, and will the left admit that this is one of their problems when it comes to winning national elections? Well, let’s go for the source. Let’s go to Miss America, Nancy Pelosi the leader of the Democrats in the House. Wolf Blitzer Reports last night CNN. She was asked this question by Wolf, “Congresswoman, what happened to the Democrats?” 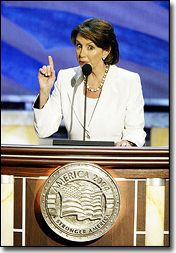 PELOSI: Democrats did not connect well enough with the American people. Certainly Democrats are faith-filled. Certainly we love our country, and we’re very patriotic, but somehow or other that did not come across when 61% of those who are regular churchgoers voted Republican — voted for President Bush, and when 22% of Americans gave its highest number to what determined their vote to issues relating to morality, more than the economy, more than terrorism. So I believe that we have it within us. I know that many of the people who are in politics on the Democratic side do so according to the — the gospel of Matthew and indeed the Bible, but we don’t demonstrate it clearly enough and faith is such an important part of the lives of most people in our country. They want to know that we identify with that.
RUSH: So far, so good. So far, so good — except I can poke a lot of holes in this. She’s aghast that so many people, regular churchgoers voted for Bush and not for Kerry. It’s even worse than that. Kerry got a majority of people who never go to church. Now, this illustrates this divide profoundly, and so she’s sitting there saying, “I wonder why we don’t get this people.” Hey, it’s not that, Nancy. It’s the people that vote in zilch church, no church are voting in majority for Kerry. But let’s go to her next answer. Wolf says, “Well, what worries you most about the Republicans in control of both houses by even bigger margins, as well as the White House during the second term?”
PELOSI: I am very concerned about the radical right-wing agenda of President Bush and the Republicans in the Congress. They couldn’t talk to the American people about creating jobs or expanding access to quality health care for more Americans or including many more people into education, higher education. They starved No Child Left behind. Thirty years of bipartisan environmental progress rolled back quietly and quickly. Concerns we have about the war in Iraq, they diverted the public’s attention to issues of faith and family and country which are issues of grave concern to all of us. They’re our highest priorities. They are our lives. But they did it in a way that eclipsed the issues that government really has to deal with. And when they took it to religion, I think they dangerously blurred the line between church and state, and I think that’s a very major concern that I have with the president and the Republicans and Congress —
RUSH: See, now, it took a while to get to the meat of this bite here, but in the first bite, “Oh, we’re religious. Oh, we believe in Matthew and God.” It was all God. It was all Bible. “We don’t understand. Why, we gotta make ’em do a better job of convincing people that, by gosh, we’re Godly, too, and we people are religious, and our voters like God,” and then in the second bite: “I think they dangerously blurred the line between church and state. It’s a very major concern I have with the president and the Republican Congress when they took it to religion.” They can’t do it. She can say it in the first bite, but she doesn’t mean it. They don’t mean it. They can say it, and they can act all sorry when they get creamed for not saying it in the campaign, but they don’t mean it. Do you realize what would happen to their base? I’m convinced that all of Kerry’s talking about faith and God in the Oval Office, I’m convinced that hurt him, too. He started to talk about that in the last two weeks of the campaign.
END TRANSCRIPT