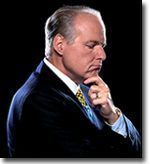 RUSH: You know, you can say Geraldine Ferraro. I don’t think Geraldine Ferraro had much to say about what happened in ’84. That was Mondale. The top of the ticket is what wins or loses in these things, and I don’t mean to be disrespectful here but I think all of these movements in the country are cyclical. Most of these movements are liberal movements, and they come alive at what are considered to be opportune times. My general assessment of the militantism of feminism is that it’s dormant. It is pretty much happening underneath the radar. Aside from the ongoing battle over judges, it’ll pick back up now when the first federal judge or Supreme Court nominee is named by President Bush. I mean, you didn’t see a lot of feminist representation in the Kerry camp. You didn’t see a lot of feminists campaigning with him. Pat Ireland basically has been marginalized. She wandered to the YWCA and from there, where did she go? All these old leaders of the NAGs and the NOW gang, they’re pretty much silent. They’re not actively participating as a member of the Democratic coalition, which is out there trying to get votes.

We’ve gone from the soccer mom vote for to the security mom. The security mom is the antithesis of feminism, you know, with this new attention that’s being paid to marriage and so forth, I mean that takes away from feminism. Feminism was not about that. Feminism was about liberation. Anything that a woman did with a man that enhanced her life, that was frowned upon by the militant NAGs. I mean, any pleasure a woman derived from a relationship or anything with a man, that was considered a sellout or at least something that was retarding the liberation, the progress of liberation. I haven’t had a sense in this last election that they were a big factor. Mr. Snerdley is looking at me with a doubtful look. You disagree with me on this? The reason why you’re looking at me doubtful is because you know I’m right, because you’re having, “You know, I can’t think of any big political feminist movement that was part this campaign.”
I think they did suffer a lot of credibility problems during the Clinton years. I mean, if the feminist movement, the militant feminist movement, were honest they would have had to abandon Bill Clinton early on, and certainly when Monica came along. I mean, that was exploitation, that was against everything the feminist movement stood for. When Paula Jones came along and filed her suit, she should have been the number one ally of the feminist movement if it were genuine, but they made fun of her. She was trailer park trash. What the feminist movement illustrated to me back in those days was it was really not about women, it was about liberalism and class. Paula Jones was trailer park, and they didn’t want to associate with some trailer park babe. Besides, Clinton was more important and valuable to them, so they could subordinate what their claims of, you know, liberation for women were to Clinton because Clinton was deemed more important to the feminist liberal agenda than he was damaging to the liberal feminine agenda, if you will.
And I thought, “These people are going to have a credibility problem with this.” Because I mean the very things that they’ve been harping, they didn’t come to Kathleen Willey’s defense, they didn’t come to any of these women who were exploited and then when the Clinton team started trashing these women as sluts and whores and stalkers and so forth, they were silent on all that. And I think ever since then they’ve had, well, if not a credibility problem, they’ve had to go silent or dormant, and whatever work they’re doing is behind the scenes, let’s say underneath the sheets where nobody is actually watching it go on.

I mean, you know, the NAGs’ convention every year, the National Organization for Women, the NOW gang, their convention, whatever it was, was covered as though it was big, big news. I don’t remember when the last time I saw a NAGs convention covered. You know, at the time of their peak influence, the NAGs’ national membership was like 250,000 and never did represent the majority thinking of the women of America. And there are very many different, shall we say, degrees of feminism. Some feminists simply think that it’s about equal pay and equal opportunity and so forth, and they’re right. But militant feminism was never just about that. It was about division, it was about distance and separation, liberation really meant that. I mean you had people like Katharine MacKinnon, a law professor, University of Michigan, teaching young college co-eds that all sex is rape, even the sex of marriage. This was something going on in the early nineties. You don’t hear this anymore. This radical agenda that they were out there proposing and promoting, it just didn’t connect. Most women do not think of sex in a loving relationship as rape, and they don’t want to. They don’t want to.
I don’t know. I just think they were way too angry and radical and as to their impact on the election, I don’t think it was much at all. I think that the fact that they didn’t have any impact or much at all is a testament to the waning influence politically that they have. Otherwise the soccer mom phenomena should never have happened under feminism because that was a woman depending on a man, a president, to keep her and her kids safe. That’s not what the militant feminists were all about. Then the security moms came along and that was even worse for the feminists because that was a Republican man keeping them and their kids safe, i.e., George W. Bush.

But the other offshoots of feminism, I mean nobody can object to equal pay, equal opportunity. But I’ll tell you something else that did it in, folks, was just human nature. Let’s take a look at the timeline here, and you know, they had in their day, these militant feminists had, a tremendous influence. And one of the things that happened and I can’t disagree with this, by the way, they told women that there was a place for them in the career

world, in the business world, that you didn’t have to stay home. Now, they went too far because they ridiculed at the same time women who did choose to stay home and be mothers. They ridiculed that in order to get as many women out of the house as possible. They said you’re letting the sisterhood down if you don’t explore fully your potential as a human being and a woman. But a lot of women said, “Okay, fine. This is cool. I’m going to go out and I’m going to be a career woman,” and they did. And they went to school and they got their degrees, masters and so forth, and they became lawyers and career business people. But then, this dastardly thing called a biological clock started, tick tock, tick tock, ticking, and it caused these career women who at some point they realized the time is running short for me to become a mother at a young enough age where I’m going to be with the kids. And so feminists said, no problem, have your mother, we’ll get day cares built at the office so you can farm your kid out to a day care center, but don’t give up your career. Women said, that’s cool, we’ll do that. We’ll make the boss put a day care center at the building, and all this stuff, and all this stuff happened. But then what went wrong over time, and this is the cyclical evolution of these things (when I say went wrong to the militant feminists) what went wrong is that the women whose biological clock made them desirous of having children, more and more of them decided to chuck the career after giving birth and chose to stay home and raise the baby and be with it and then have more, which was not in the original plan.

In fact, you could say that, and I think this is probably one of these unplanned coincidences that was actually somewhat pleasant, it turns out that this movement by the militant feminists actually ended up giving women far more choice in the business world than men today have. A man today would be finished if he goes in to his boss and says, “You know what, I want nine months leave. I want to stay home and raise the babies, and I want to stay home for as long as I want, then I want to come back to my job as it exists today.” And his boss will say, “Sorry, Fred, can’t do it.”
A woman can get that deal. She can get her job protected, get maternity leave. Now, I know there are house husbands out there and so forth, but they generally become entrepreneurs. They don’t go back to becoming employees at places where they work. Women can do that. So they actually have a little bit more choice in that regard in the business world than men do. But they can choose, and more and more of them are deciding after they give birth to their first child to stay home and raise it and have more, which has caused the militant feminists to tighten their bras out there even a bit more — those who still wear them.
END TRANSCRIPT