incurring the wrath of the mainstream media, which is their megaphone. They’re not at all going to do that by being critical of this. In fact they may pile on and offer their own so-called opposition to Dr. Rice.

CALLER: Where I come from, I’m from, like I said, from the inner city, raised in the projects 20 years of my life. I had to make some adjustments, and because I tried to make some adjustments. I was ridiculed. I was turned off. There was a documentary being filmed somewhere here in Chicago, and I stepped up to the mic to give my opinion on something, and because of the way I spoke, Rush, they would not take me! They would not. Do you understand what I’m saying?

CALLER: They take the fellows from the hood that want to talk, “Yeah, yeah! Me and my fellows, me and my homeys, me and my boys,” versus someone who’s trying to articulate, trying to express —
RUSH: Hey, hey.
CALLER: (Laughs) Do you see where I’m coming from?
RUSH: You’re talking to the converted, Gino. I mean, when they want Sean Combs out there — P. Diddy, for those of you in the red states — registering voters with a program called Vote or Die; they’d rather be associated with P. Diddy or Russell Simmons of the hip-hop network or whatever it is he runs, and all of these programs that are designed to keep certain black voters on the liberal plantation. None of these people are going to have any objection to this. I would be stunned, because my guess is they all think this. Condoleezza Rice, my guess is they’re all jealous of her. My guess is they can’t hold a candle to Condoleezza Rice. Their brains wouldn’t equal her IQ and they know this. They’re never going to rise to the stature and status of Dr. Condoleezza Rice and that burns them up and one of the reasons they’re not going to rise there is they’re going to have to continue doing what the leaders of the Democratic Party demand they do to hold onto the crumbs that they have. It’s pure and simple.
Everybody on the left is about something these days, but this bitterness is causing them to drop this wall, this mask that surrounds them and hides who they really are. They’re so frustrated that they’re just shouting from the mountaintops who they really are, today especially in the face of these editorial cartoons. Again go to RushLimbaugh.com right at the top of the page, and we’ve linked to the outrageous cartoons we found just today.

Tony in Indianapolis. Welcome, sir. You’re next on the EIB Network. Hi. 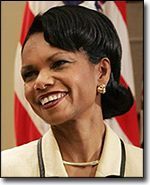 CALLER: Yeah, Rush. It’s a pleasure to listen. Basically, I’m an inner city young black male from Indianapolis, and I’m going to tell you, you know, I don’t totally agree with Bush and Condoleezza Rice, but I would say that I would debate Condoleezza Rice , and I would respect her doctorate. I respect her experience, and you know what? I think it’s crap that these guys will resort to these tactics when 30 years of breaking out cartoons, these racially motivated cartoons. I’m not the staunchest supporter of the Bush campaign and, you know, and I’m not a strong supporter of Kerry, either. He was — he was, who knows what was wrong with him —

CALLER: — but I’m gonna tell you no heart how you feel about this issue, the debate has to be on the issue, and I’ll tell you what: I’m hot right now. I’m This is unbelievable.

RUSH: Well, I’m glad, frankly. I’m glad to hear that you’re hot. I think it’s about time that you and others in your position got hot because this isn’t new. It’s just more blatant than it’s ever been.

CALLER: You brought some points up. The lady in Glen Burnie, Maryland, she was a hundred percent right. The welfare system was put in place to destroy the black families. You know, you get a benefit when you drive the black man out the home. You know, the benefit is for the black man being gone. The benefit is for there not being cohesion in the family. All this stuff set into place, and I thank God that right now it’s like a time of enlightenment where the truth is coming out, where people are finally seeing the truth, and people are making decisions. I know a lot of black people who voted for Bush just for the simple fact — and I’ve been a Democrat my whole life — but for the simple fact the Democratic Party has gone off the deep end.
RUSH: (Laughing)
CALLER: They’ve totally lost their mind, and the only restraint is to pull back and vote for the Republican Party where there was some kind of semblance of morals.

RUSH: You know, Tony, I cannot improve on that. You know, your passion speaks for itself, along with your words, and I appreciate your call. Thank you so much. I appreciate it very much.

CALLER: Thank you. Keep it up.