SENSENBRENNER: The demand was never pulled off the table, and in response to the president’s call, you know, I agreed to tweak the deal, in that if the Senate would agree to my provisions that prevented terrorists from gaining the asylum system, we would take out the provision prohibiting driver’s licenses for illegal aliens, but keeping the tough documentation standards in the intelligence bill in order to try to advance it. The Senate rejected any change in the asylum law, and once again, yesterday, they were shown to be wrong because there were 26 people that were indicted for gaming the asylum and driver’s licenses law in order to document 1900 illegal immigrants from Indonesia.

RUSH: Congressman, where do we stand on this now? This is obviously a dead issue during this session of Congress, is that true?

SENSENBRENNER: The leadership would like to have more negotiations going on before we get back here on December the 6th. I am absolutely insistent that the driver’s license provision stay in the bill. We need tough standards. We need to deny driver’s licenses to illegal aliens, and I think the proof in the pudding on that is that the 19 September 11th hijackers —

RUSH: The story here also indicates that you and Congressman Duncan Hunter were especially angered when you were called out individually by people on the Sunday talk shows that you dug in even harder. Is that true or is that misrepresented in this news story?

SENSENBRENNER: Well, after the supporters of this bad deal trashed both Duncan Hunter and me on every Sunday morning talking heads shows — neither of us, by the way, were invited to defend ourselves — it’s obvious that the positions have hardened. Neither Duncan nor I are going to give in on our provisions which we believe are extremely important to protect America and particularly to give our war fighters in combat the proper intelligence that they need. And we have been standing together on this issue. I think that we do need to reform our intelligence community. That’s a given. But if the people who receive the intelligence, whether it’s law enforcement or the war fighters in combat, do not have the laws and the procedures to be able to use that intelligence, the good intelligence isn’t really going to help anybody much at all.

RUSH: Now, are you also, in this comment, referring to the change in authority over directing and aiming satellites for combat missions?

SENSENBRENNER: Absolutely. I agree that Duncan Hunter is right on that. The Pentagon should do that, rather than the national intelligence director, because the Pentagon knows what the war fighters in the field need. There is a law enforcement provision in that as well, because if an FBI special agent in charge gets information that somebody is plotting a terrorist attack within his jurisdiction, he shouldn’t be able to have to try to figure out whether the NID’s intelligence or the FBI director’s intelligence is right. He ought to get the intelligence analyzed by somebody else and go out in the field and stop the terrorist from striking.

RUSH: We’re talking with Congressman James Sensenbrenner from Wisconsin, if you just joined us. Congressman, how many of the 9/11 commission intelligence recommendations are embodied in the bill that your opponents seek passage on?

SENSENBRENNER: Practically all of them are, except how the intelligence is communicated by the people in the field who need to use them.

RUSH: Well, what do you think about that, just as a concept? That this commission makes recommendations and there’s this mad dash to implement all of them?

SENSENBRENNER: Well, the commission isn’t elected by anybody, and to become a committee chair, you’ve got to be working with these issues for over 20 years in the Congress. The 9/11 Commission made a couple of mistakes. First of all, we shouldn’t publicize the total intelligence budget, so that the bad folks can figure out what’s going on, and for a while they wanted to have the national intelligence director be in the executive office of the president, which means that that official would not be subject to confirmation and would not have to testify before Congress. They backtracked on that pretty quickly. So commissioners make mistakes, and I don’t think this commission came down the mountain with stone tablets. We’ve had hearings. We’ve analyzed this, and as a matter of fact, the problems on aiming the satellites and giving the war fighters in the field the information came about as a result of a hearing that General Myers, the chair of the Joint Chiefs of Staff testified before in front of Mr. Hunter’s committee.

RUSH: Well, that leads me to another question on this, and this is actually a process question, and process and political question, and it doesn’t really relate to what you have said specifically here, but I’d like your thoughts on it, if you want to weigh in. Throughout this second term of the president’s — he hasn’t been inaugurated yet but he’s been appointing new cabinet members and the opponents of the public keep talking about, “Why, he’s appointing people that agree with him right down the line. There won’t be any debate in the CIA! There won’t be any debate in the State Department. This is all horrible!” Yet they send this 9/11 commission recommendation up there and they expect you guys to rubber stamp it with no debate. Now, it seems to me that there’s a huge contradiction here, that you are debating this, that you’re not rubber stamping it. It’s what you’re supposed to do. 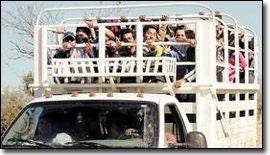 SENSENBRENNER: Rush, you’re right and if we had no hearings and rubber stamped it, we’d be criticized for that. Congress’ job is to deliberate, and I think that those of us who have been working with issues like this for a very, very long time at least have some type of an institutional perspective and memory so that we can make a good product better. I think that if we pass the bill that the Senate demanded, we’d be fumbling the ball on the 10 yard line. It’s important to do it right. It’s important to do it completely, and unless we change the issues of how intelligence is used that Mr. Hunter has been complaining about, and deal with the immigration and identification questions so that our law enforcement can identify potential terrorists and have the immigration department get them out of the country if they pose a threat to us, we can have the best intelligence in the world and it isn’t going to make us any safer. The last 10 yards are always the toughest, and Mr. Hunter and I are absolutely determined that we’re going to plow through the last 10 yards and get a good bill for America. What we’re being criticized for stopping is not because it’s incomplete.

RUSH: You just inspired two more questions. You bring up immigration as a “security issue.” How does what you’re debating in Congress square with what the president’s desires are on immigration? It’s not amnesty but the three-year worker period matching up immigrants with workers and if they’re legit, they get a temporary card for three years? How does that mix in with what you’re trying to do here?

SENSENBRENNER: Well, it doesn’t directly mix in, but in my opinion, no immigration reform law will be effective unless there is adequate enforcement, because if there’s not adequate enforcement, people are going to continue to hire illegal aliens and pay them in cash and not take out the withholding or pay them the minimum wage, which means they can get an illegal alien worker for about half the price of one who’s got these temporary green cards. But the lynchpin on enforcement is proper identification, and we all use driver’s licenses as identification, whether it’s to get on airplanes or get into courthouses and things like that, and until we tighten up the driver’s license provisions, we’re not going to have the enforcement that’s necessary to make any kind of immigration reform work. I’m against amnesty, and I have always voted that way, but I’ve come to the conclusion that if we continue having the present system, we’re just going to have millions more illegals come across the border because they know they can get jobs because neither their employers nor they will get caught and have to pay a penalty.

RUSH: Another process question before we have to let you go, and that is: The battle between the Senate and the House is legion. It’s nothing new. But it seems there’s a battle between Republicans in the Senate and Republicans in the House. Many had hoped that the results of the election would force some sort of change in this acrimony. Do you see that as a possibility?

SENSENBRENNER: Well, what’s happened in the last 72 hours certainly hasn’t helped. You know, one of the House members’ criticism of the Senate is that the Senate likes to legislate based upon what looks good on a bumper sticker or a sound bite, and it’s up to those of us in the House to make sure that the devil is in the details and the details work. And I think that this goes to the crux of the dispute that we’re having with the Senate on how intelligence is used, and on the driver’s license and immigration provisions. We in the House want to make this work, and we know that to make this work properly, as our constituents expect us to, is to ensure that the intelligence is properly utilized, and that we will be able to stop people getting fake driver’s licenses and gaming the asylum system to completely flout our laws and in some instances plot and execute terrorist attacks.

RUSH: So the Senate just wants to be able to say they got something done; you all in the House have to make sure it works.

SENSENBRENNER: Yeah, and you’ll remember that a year and a half ago, the Senate criticized me on the amber alert bill because I wanted to put law enforcement provisions in —

SENSENBRENNER: – -and I stood my ground, despite a lot of criticism, stared them down, and now we’ve had people who are being sent to jail for being involved in sex tourism, and people who are being sent to jail because they put deliberately misleading domain names on to lure children in to looking at pornographic websites. Without me standing firm on that, that wouldn’t be the law and these people would continue to prey on children. So standing up to the Senate, in many instances, results in better laws and that’s what Mr. Hunter and I are trying to do in this area.

RUSH: Congressman James Sensenbrenner from Wisconsin. Before you go, you mentioned that you’ve got the ball down to the 10 yard line. You got any running backs for the Packers you can pull out of your hat for them?

SENSENBRENNER: Well, they all seem to be kind of hurting, but remember, Rush, the Packers have now won five straight. The last two with a field goal as the clock was running out but that counts just as much of a W as the 40-point win.

RUSH: Ever so true. Well, Congressman, thanks for calling —

RUSH: — and straightening this out. We admire you here very much at the EIB Network. That’s Congressman James Sensenbrenner of Wisconsin.
END TRANSCRIPT