I guess enforcing the Kyoto treaty would be pretty hard for those stupid enough to implement it. Who’s going to sue the sun or Mount St. Helens when they violate the treaty?
“And how can Mother Nature be so anti-clean air?” writes Sandi Doughton, who wrote the story. I thought everything about nature was to be respected and admired, even protected. Yes, yes, so we gotta protect these polluting, belching-filth volcanoes. The real question here, or the real point to be made is, ladies and gentlemen, we keep hearing that Mother Earth is pristine, nature is natural, environment is all that is right and good. It is only man that corrupts. It is only human Americans that destroy our environment. Do you know China is exempt from Kyoto? Do you know the Chinese are exempt from the Kyoto Accords, the Kyoto Protocol, and they’re going to become one of the largest polluters in the world, given the definitions of polluters these days with their advancing quest for oil and their massive infusion of automobiles for families over there. But the bottom line here is look at nature, look at what nature does. 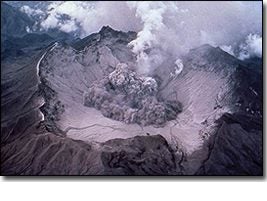 When Mount Pinatubo erupted, made the same point, Mount Pinatubo put more gunk in the air than all the automobile exhaust in the history of the automobile combined. To me it just debunks the whole theory behind militant environmentalism, which is that the only destructive agent on earth is mankind. To say that this is destructive is silly. If you’ve got to protect the environment and if it’s all that’s good and it’s pristine, how can a volcano spewing sulfur dioxide be considered something that needs to be guarded and protected and worshiped and so forth and so on? It’s just a testament to the resiliency of the earth and how we’re powerlessness over it when you get right down to it.
END TRANSCRIPT