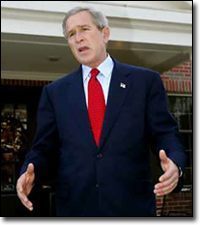 Ladies and gentlemen, I want to go back here to Social Security. We spent some time earlier this week on it. The president mentioned it extensively in his final press conference of the year. I’ve been doing some deep research with people in the know and behind the scenes about this, and I want to share a little bit of it with you, and I’ll start by quoting a Reuters story today: Bush Plans a Media Blitz on Social Security. “President Bush will spearhead an election-style public relations campaign early next year to try to convince Americans that Social Security is in urgent need of change but will keep dollar and cent details deliberately vague, analysts and officials say.” And then the story has plenty of reaction like David Wade, spokesman for John Kerry, said, “The administration’s blitz on Social Security is eerily reminiscent of the way they made their case for war.”
So the Democrat response is that the Social Security crisis is sort of like WMDs, and that was all bogus and phony, and so is this crisis. Well, they really want to use this analogy? There’s no money in the Social Security trust fund! There’s your analogy. If you want to say that it’s like WMDs, there’s no money in the Social Security trust fund, just like people think there were no weapons of mass destruction. But Bush wasn’t making that up, and he wasn’t lying. The whole world thought it, you go back to ’98, Clinton thought it, Daschle thought it, they were all getting on board, John Kerry thought it, they all voted for war based on this, they all had the information, they all had the intelligence. It’s just like all these elected officials do, they want to pass the buck when it doesn’t prove out to be true, they want to act like they were kept in the dark and they didn’t know beans and they were lied to. So now they’re trying to set up —

It’s interesting that their first reaction here is not, oh, you can’t do that, you’re gonna pull people out of Social Security, you’re going to cut their programs, cut their benefits. That will happen, don’t misunderstand. Their first technique, their first technique is something they lost an election with. They tried to win this election on the fact Bush lied about weapons of mass destruction. Did they win the election? No. Did they lose it? Yes. Did they lose it big? Yes. And they’re going back to that? They’re gonna try to re-fight the weapons-of-mass-destruction battle over the Social Security plan the president has? You’ve got to love these people, folks, you’ve got to thank God for these people. What a Christmas present that the left is looking at this issue that way. They want to fight the Social Security battle the same technique and basis they used to oppose the president in the election by saying he lied about the weapons of mass destruction.

So we now see what’s clear. Whatever the president really goes out and sells, whatever he really believes in, whatever he says must be done, they’re going to say, “Just like weapons of mass destruction, it’s a made-up crisis, he’s lying, it doesn’t exist.” He wasn’t lying, and the American people don’t think that he is a liar. And the Democrats continue, apparently here, to try to structure their opposition to this president even after this election on the basis that he’s lying. If they can’t come up with any better way to oppose this than that then the biggest problem the president is going to have is Republicans! That’s the biggest problem he’s going to have. We know the Democrats are going to oppose it, and we know why they’re going to oppose it. Democrats are going to oppose it because they don’t want it to work. They don’t want there to be a fix because they don’t want any fix to involve the government’s involvement being less. They don’t want retirement programs generated by the government to get so big that people don’t need to depend totally on government for it anymore. The Republican opposition to this is gonna be based on cowardice.

Now, that’s too strong a word. The Republican opposition is gonna be based, and it will come primarily from the House, and I’ll tell you why. The House runs for reelection every two years, all 435 members run every two years — well, there’s more than 435, you’ve got the nonvoting members from Puerto Rico, the nonvoting member from the District of Columbia, wherever else we have nonvoting members that freeload on us living in homes in Washington. Well, I don’t consider Guamers freeloaders. I’ll take that back. I got a lot of respect for Guam. We got a radio station in Guam. We own Guam. I love the name Guam. I’ve loved it ever since I first heard it in World War II. It’s my second favorite island next to Midway. What a great name for an island.

At any rate, the Republicans that have to run for reelection will be scared to death that their opponents are going to run ads that say such-and-such voted to gut Social Security. That’s what they’ll be afraid of, and so they’re going to be very concerned that this plan can’t be done in enough time for there to be demonstrable success for them to call on and point to, so the president’s got a tough sell. He’s going to have a tough sell in his own party. We

know the Democrats are going to oppose this, just for the principle of it, and I mean the principle of opposition, not the principle to do anything else. The one principle they have is opposition. But there are some things that you have to know that I think are the objective here. I think the purpose here, just like the overall-purpose of the war on terror is often obscured. There are actually multi-purposes to it, but the number one purpose of the war on terror is the national security of the United States and the safety of our people. That’s the number one purpose. It often gets discounted, “We can’t go on and make the rest of the world a democracy, we can’t do this, some of these people aren’t ready for freedom.” It gets demagogued as does Social Security.

The aim here, in Social Security, is to introduce market reforms and make the system permanently solvent and sustainable so that you don’t need to fix it every ten or fifteen years. That’s the purpose. And this effort will be aimed at the establishment, the creation of what are called PRAs, personal retirement accounts. However, because this is an ownership society, and this is where the Democrats continue to miss out, this is an ownership society, 60% of the American people, 57%, whatever it is, own stocks or bonds. They understand these kinds of things now. This is not a labor union society. I mean, most people are wage earners, but they invest, and they invest for their retirement, they invest for kids in college. They’re sensitive for this. However, I think the objective is a greater opportunity, a path to greater opportunity and more freedom and more control for individuals over their own lives. The president believes this, that’s the purpose of this, is to free them from the shackles here of a very limited and small retirement that Social Security will benefit, and it’s gonna get even smaller over the coming years.

The thing I also think needs to be said and understood, and I think at some point the administration will mention this, don’t get totally caught up in just the personal retirement accounts alone because the Social Security problem cannot be solved with personal retirement accounts alone. If the goal is permanent solvency and sustainability, which it is, PRAs are not sufficient among themselves to the task. So if we borrow, say, one to two trillion dollars to cover transition costs for personal savings accounts, and make no changes in what’s called wage indexing, we will have borrowed trillions and still confront more than $10 trillion in unfunded liabilities.

Right now, benefits are based on your income, because your income determines what your contributions are. Your taxes, your FICA taxes. The ceiling on income from which FICA taxes are taken, is now 89.3, whatever, it’s going to go to — or 87.9, something like this. It’s going to go to $90,000 next year. And if that keeps being raised, that’s all well and good, but that means that those people that continue to pay taxes at the ever-more-increasing ceiling rate are going to be liable for more benefits as well. That’s what the wage indexation

is. This is a very brief explanation of this. So if the economy grows faster and wages rise, this produces more tax revenue, but the faster wage growth will also mean that we will owe more in Social Security benefits. And this is why we have produced a never ending cycle of higher tax burdens even during periods of robust economic growth. It’s like the dog chasing his trail around the tree, he can go faster and faster and faster but never make any progress, because the benefit payout keeps increasing along with the tax increases, or the ceiling on income. So there’s going to have to be some wage indexation repeal along with the personal retirement accounts. Here, let me just give you a startling fact on this. Under current law, this is 2004, so 46 years from now, under current law, an average retiree in 2050 would be scheduled to receive close to 40% more in real terms and benefits than an average retiree today. And yet there are no mechanisms in place to produce the revenue to pay out those benefits.

No one can tell you why a 25-year-old person today is entitled to a 40% increase in Social Security benefits in real terms compared to what a person retiring today receives. And personal retirement accounts alone are not going to change that aspect. So, to meet those increased benefit levels, one option would be to raise the age at which people receive benefits. If we did today what they did when Social Security was first created, make the age at which you get Social Security benefits above the average age of mortality, we’d be looking at raising the benefit age to 85, and that ain’t going to happen. Do you realize that was part of the original plan? You didn’t get Social Security, until you outlived your life expectancy of the day. Life expectancy today is 75. Can you imagine telling people you don’t get your benefits till you 76? There would be a revolt. But that’s how the program was started. And they’ve lowered that age because it’s been politically beneficial.
The point is there’s a lot here that has to be reformed and fixed. And for every Democrat out there telling you this is as empty a claim as the weapons of mass destruction, don’t fall for it. The figures are the figures, the numbers are the numbers, and, you know, this is the one circumstance you have the best shot at fixing this, with the president in the second term who is ready to roll and is not worried about reelection. But that’s where the Republican opposition, all the Republicans who will be running for reelection will enter the fray and make this a real challenge.
END TRANSCRIPT