The left, liberal Democrats in this country, the elites, the so-called elites, win elections anymore. They have not won a significant election in a long time and they continue to lose ground in each election that takes place. They are so far out of the mainstream of America’s values and belief system that even when they run their candidates for president on a strategy of concealing their liberalism, they still almost always lose. So what do they need to do? Well, in a way this is nothing new. A lot of liberalism has not found its way into the fabric of our society legislatively. Much of it, if not most of it, has found its way into the fabric of our society via the courts, and that’s why they are paranoid of Bush judicial nominations. As such they have to go over the head of the American electorate. We don’t elect judges and we don’t have anything to say about what they do. We can’t put them there. We can’t get rid of them, and so the left in that sense goes above and beyond the American people to get what it wants. But they now in this case, they can’t just rely on the judiciary. 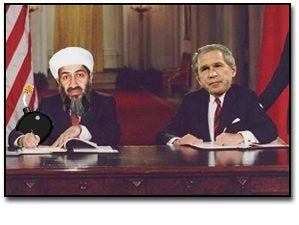 They need a more comprehensive and systematic way to go above and beyond or over the heads of the American people. In other words, since they know they’re so far out of the mainstream, they know they’re not popular. They know their ideas will not win majority approval, they have to find a way of getting them implemented anyway without using the American people, without depending on the American people — without, dare I say, utilizing the democratic process. So, what do they do? What is their more comprehensive and systematic way of going above and beyond the American people? From their perspective they change the electorate. They change the group of people to whom they appeal. They ignore the American people while making it look like they’re appealing to them, and you go elsewhere. This is why the left is constantly demanding that we surrender our independence to the UN. This is why John Kerry, who is a typical, great example of a liberal elitist, who is out of touch with the values and beliefs of this country, wanted to defense of this nation to the United Nations and a host of other international groups as well.
This is why they’re so… Why do you think Clinton is spending so much time or did last year over in Europe seeking applause and seeking approval? Because that’s his audience; that’s why he’s truly loved. That’s why Kerry was truly loved: in the capitals of the socialist western European nations that couldn’t hold their own hats in a 40-mile-an-hour wind if that lives depended on it. So they go to Europe; they go to France; they go to Germany and any other socialist entity they can and they seek them as allies. Europe, the Third World, all of these places are left wing. They are socialist. Some of them are communist, and they’re almost the mirror image of the American left, and so what happens is that the left in an effort to get what transports in this country, when it can’t do so with the Democratic process seeks to essentially diminish our sovereignty by turning over such things as our defense, or seeking to, and our important matters to international organizations. By diminishing our sovereignty in this, and that’s the end result of it, the left can then appeal to a far more receptive audience or population: western European socialists, Third World dictators and thugs, and the like. That’s what’s going on here.

They’re desperate. They do not want to give up their power. They do not. I mean, they have lost it but they are still seeking to exercise it and that’s why you still hear people like Nancy Pelosi or Patrick Leahy or Dick Durbin continue to talk as though they represent the majority of Americans. You hear them speak, and you would conclude that they won the last election. When they hear it, when I hear it, I’m offended at the arrogance of it: the arrogance that they still believe they represent the majority view of a democratic nation that is rejecting them. They do represent a majority view. Their view is shrinking in terms of its belief held by a majority of the American people, and part of their effort to assert themselves is this confirmation hearing that will Saturday tomorrow in the judiciary committee with Alberto Gonzales. They are attempting to define “torture” down so that the Bush conduct of the war on terror. It has nothing to do with Abu Ghraib. They’re going to use Abu Ghraib but this has nothing to do with Abu Ghraib. This has everything to do with G’itmo and Al-Qaeda and Taliban terrorists, not a bunch of Iraqi terrorists and insurgents that have been captured. They are seeking to defend Al-Qaeda and Taliban related groups and individuals who seek to replicate what happened in this country on September 11th, 2001.

RUSH: Andrew McCarthy’s close in his brilliant piece today, National Review Online, is this: Alberto Gonzales’ “position on this matter [of treatment of detainees from Al-Qaeda and the Taliban at Gitmo] is not a radical view. It’s America’s view. So ask away…” Senator Depends. Senator Durbin! Should we just go ahead and sign a treaty with Al-Qaeda and grant them prisoner of war status under the Geneva Conventions, and do you think we’ll get 67 votes for this? Name for me the first senator who will vote for a treaty with Al-Qaeda. And then after this vote is taken, and let’s say there are 67 votes — even though there wouldn’t be one but let’s just play the hypothetical game — let’s then go find somebody in Al-Qaeda to have the big signing ceremony with. Do we bring the Al-Qaeda representative to the White House? Do we have a big fanfare and a state dinner where we announce the signing of the treaty like we did when Gorbachev and Brezhnev and Khrushchev and all these other worthless scoundrels from the Soviet Union showed up?
Can we envision this, ladies and gentlemen? Maybe we go find bin Laden. That’s what we need to do! Sign a treaty with bin Laden granting them the status of the Geneva Conventions, even though we don’t require them to put on uniforms, to be members of a nation state. They exist exactly as they are, and they don’t have to change a thing they’re doing. They can still try to blow up buildings, hijack airplanes, attack the U.S. military. We’re just going to have a treaty with them where we grant them Geneva Conventions POW status because in effect, folks. That’s what Senator Leahy and Senator Durbin, the other Democrats on the judiciary committee are doing. By attacking this administration, Alberto Gonzales, Cheney and Bush, they hope, in their prosecution of the war on terror — and make no mistake. This isn’t about Abu Ghraib. This simply the vehicle that these American senators are seeking to utilize to drum up support. They do not understand. In fact, you go back and look at the polling data, you’ll find that the two groups of people that were the most outraged and the most upset over what happened at Abu Ghraib were the media and the Democrats in the Senate.
The American people by a vast majority that this was a problem, because the American people understand we’re at war. The American people have not forgotten 9/11. They don’t think it happens in a vacuum. The American people’s sons and daughters are in the U.S. military, and they volunteered for it, and they do not want their sons and daughters who volunteered to protect this country to be given less legal status than a bunch of s– (sigh) terrorists. I don’t need to finish the sentence. These Democrats are not going to have a majority of the American people behind them and as such they’ll going to shoot themselves in the feet as they continue to embark on the same Bork procedures that they think they have succeeded with over the years. What they don’t get, what they refuse to understand is that those kinds of tactics are parse and parcel of why they are in an ever-shrinking minority and loss-of-power situation in this country. So I am sort of torn. I enjoy the fact that they’re shooting themselves in the feet.
I enjoy the fact they’re making absolute fools of themselves, but at the same time I am offended there are Americans in the United States Senate who are acting as the equivalent in World War II of any American who would stand up for the rights of POWs and try to grant them rights and privileges from Miranda on down of the U.S. Constitution. So let’s do. Let’s take Mr. McCarthy’s idea and let’s make it official. Let’s try to get a treaty with Al-Qaeda. Big signing ceremony in Washington. Everybody will feel better. Liberals always love treaties, especially treaties made with lying who have no intention of upholding their end of the deal. Liberals like treaties even when the nation that signed the treaty no longer exists. The old Soviet Union signed all these SALT treaties, Strategic Arms Limitations Treaties. When the Soviet Union disbanded and became Russia again, Bush said, “We’re going to tear that one up. It doesn’t apply.” The liberals went nuts. “You can’t tear up an arms treaty!” Bush said, “Watch me.” (tears up paper) He tore it up. Libs are still frosting over that. So they love treaties. Let’s have one, with bin Laden. I hope I’m invited to the state dinner.
END TRANSCRIPT