RUSH: We have a couple sound bites here, both about a minute and a half. Barbara Boxer and Condoleezza Rice. I just mentioned these two. This was quite testy today from her confirmation hearings on the secretary of state nomination. Here is bite one of the first two.

BOXER: The question is, this is a pattern here of what I see from you, on this issue, on the issue of the aluminum tubes, on the issue of whether Al-Qaeda was actually involved in Iraq, which you’ve said many times. And in my rounds — I don’t have any questions on this round, because I’m just laying this out. I do have questions on further rounds, about similar contradictions — it’s very troubling. You know, if you were rolling out a new product, like a can opener, who would care about what we said? But this product is a war, and people are dead and dying, and people are now saying they’re not going to go back because of what they experienced there —

BOXER: — and it’s very serious, and as much as I want to look ahead, and we will look together on a myriad of issues, it’s hard for me to let go of this war because people. Are. Still. Dying. And you have not laid out an exit strategy, you’ve not set up a timetable, and you don’t seem to be willing to, A, admit a mistake (scoffs) or give any indication of what you’re going to do to forcefully involve others. As a matter of fact, you’ve said more misstatements, that the territory of the terrorists has been shrinking when your own administration says it’s now expanded to 60 countries. So I am deeply troubled.

RUSH: And as you heard, she’s not asking any questions. She’s pontificating, and making speeches. I’m convinced here that Barbara Boxer, because she just won reelection, probably isn’t going to run again, is the designated link to the Democrat base. Barbara Boxer has been designated to get up and say the kooky blueprint things that these Looney Toon Democrat kook fringe mainstreamers believe. That’s her purpose. She’s the link to the Democratic Party to the base, so the base is satisfied that the party is tackling all these hard issues. Because what she just said there was just full of pap and contradiction, and it’s loony, and it’s designed to appeal to just a few Democrats out there, although they’re getting larger and larger, the Democrat base, but it continued this way. 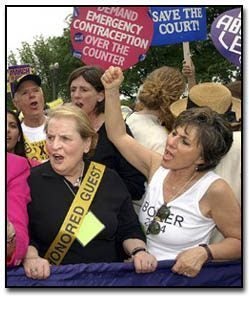 BOXER: You should read what we voted on when we voted to support the war which I did not but most of my colleagues did, it was WMD, period [sic]. That was the reason and the causation for that, you know, particular vote. But again, I just feel you quote President Bush when it suits you, but you contradicted him when he said, “Yes, Saddam could have a nuclear weapon in less than a year.” You go on television nine months later and said nobody ever said it was —

RICE: Senator, that was just a question of pointing out to people that there was an uncertainty, that no one was saying that he would have to have a weapon within a year for it to be worth it to go to war.

BOXER: Well, if you can’t admit to this mistake. I hope that you’ll —

RICE: Senator, we can have this discussion in any way that you would like, but I really hope that you will refrain from impugning my integrity. Thank you very much.

RICE: Senator, I’m happy to continue the discussion, but I really hope that you will not imply that I take the truth lightly.

RUSH: And that’s her role, to accuse Condoleezza Rice of lying and thus the administration of lying because the Democrat base wants to continue to base its vitality and its own viability, its own reason for existence on the fact that “Bush lied.” Barbara Boxer still running the 2004 presidential campaign as the link to the Democrat kook fringe base.
END TRANSCRIPT