RUSH: We have audiotape, ladies and gentlemen. Some of the protesters that were gathered along the parade route, the media made sure to find these people yesterday and as such, we can play some audio for you — and you can’t have a kook protest without some good chants. So we got a montage here, which gives you a sampling of some of the kook causes that were represented at the anti-Bush inaugural protest, which all the networks covered so thoroughly and seriously as a vital part of American democracy. 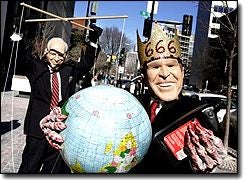 VOICES: US out of Iraq! Bring the troops home!
No justice! No peace! US out of the Middle East!
Racist, sexist, antigay! George Bush, go away!
Bush is killing by the hour! What do we do? Fight the power!
End! The occupation! bring the troops home now!
George Bush, you can’t hide! We charge you with gen-o-cide!
Hey, hey! Ho, ho! This racist war has got to go!
Occupation is a crime; from Iraq to Palestine!
Black! Latino! Arab! Asian and White! United for equality, we will fight!
No blood for oil; US on Iraqi soil! Bush-Cheney, what do you say? How many kids did you kill today?
RUSH: That’s my favorite one: “Bush-Cheney, what do you say? How many kids did you kill today?” This is a protest by ANSWER. This is a group called “Act Now to Stop War and End Racism.” Here we have a kook protest. These people, they don’t know how idiotic they sound or look and they don’t care. These are professional protesters who are leftists and they’ll show up at any protest. They’re also members of the animal rights movement. They’re the same usual suspects. They’ll show up at an environmental protest or a World Trade protest. See, they just travel around. This is all they do. It’s the same bunch, and, you know, they’ll protest homelessness. Whatever the cause, they’ll be there — except when there is a Democrat president. Then they sort of just vanish and plot tactics for the next time a Republican’s in the White House. Here on C-SPAN 2 yesterday, during the presidential inaugural ceremony was a protest by ANSWER, and this is a rap by the rapper Daniel Lopez.

KOOK RAPPER: I’m going to tell you a little something that I wrote, okay? Here we go: “This is the end of the world as we know it. NWO. No more lower class, middle class, upper class, Generation X turn, Generation buck and dash, have to be a part of it. Life I see a Russian pass, Tokyo stash against tuck fast, from the past to the future raze don’t hate it punks (idiocy unintelligible) lifelines flat piece of foregone task advantage determined by race. Who’s gonna last? Filling Mother Earth’s clothes with holes made brothers into foes. We have lost control. The average citizen pissed again, innocent shift again, race for state for (apparently random syllables) United States split again. Just when it was straight again Republicans is [sic-are] in again. Keep the lives of whites and blacks at distances. Killing over religion don’t know what the f(bleep) the difference is. War after war and the winner is? (takes a dramatic pause or perhaps forgets the words) Neither side. He did rise succeeded ceded lies with heat brings gunfire greed of swindling trials. Die for our country more then [sic–than] a thousand miles away. Listen to the words I’ve displayed. Thank you all. (one person applauds) 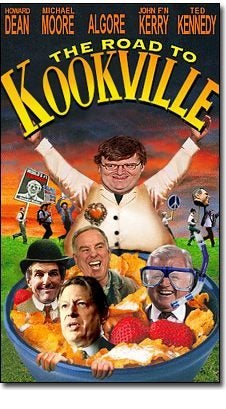 RUSH: And, again, the famous rapper, Daniel Lopez, ladies and gentlemen. When I listen to Peter Jennings describe all this as seriousness? We had to pay very much attention here. This is a vital part of American democracy, the fine art of dissent and so forth. It’s just interesting to note what side these people are on. When you hear all this, you just know, you see Barbara Boxer and Nancy Pelosi, Ted Kennedy. This is the modern American left, and this is their kook base, folks, these protesters. If you want to know, this is who votes for them. This is out there demanding that Barbara Boxer and whoever else make a spectacle of the electoral vote count and cause Ohio to be looked at and objected to. These are the people forcing Barbara Boxer into her attack on Condoleezza Rice. This is who they are which is why you should not be worried about them.
Now, I want you to hear this guy introduce himself. It takes him 20 seconds just to say the name of his organization. Now, I’ll give you a hint. His name is Ben Lynch. The name of his organization is: “The Coalition to Defend Affirmative Action, Integration, Immigrants’ Rights, and Fight for Equality by Any Means Necessary,” and there’s an acronym. I’m not even going to… It’s CTDAAIIRAFFEBAME Here’s just a portion of his remarks as he introduces himself.
KOOK: My name is Ben Lynch. I’m with a group called the Coalition to Defend Affirmative Action, Integration, Immigrants’ Rights, and Fight for Equality By Any Means Necessary. (pause, silence from crowd) Is our country — is the United States of America going to be the sole imperialist power of the world that has the right to occupy and colonize all, you know, oppressed nations on this earth, when we have financial…incentives for their resources? Kerry wouldn’t stand for it.
RUSH: There’s your Democrat base. Totally, totally screwed up. They don’t even know… It’s a character, I know. If I didn’t tell you that this was an actual protester, you’d say that we’d gone out and made a parody of one, and the same thing with that previous rapper. But no, my friends, this is who they are. These are the examples of the American left. This is who is becoming the base voter in the Democratic Party.
END TRANSCRIPT