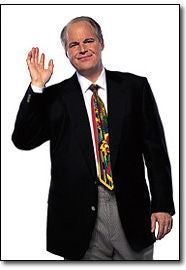 “Pity the Democrats,” and the headline of this story, by the way: “Gloomy Democrats Left Hoping Republicans Will Self-Destruct — Pity the Democrats. They lost the U.S. presidential election and, this time, it wasn’t close. They lost seats in the Senate, including that of their leader, Tom Daschle. They lost seats in the House of Representatives. So now an enfeebled party, a favorite to many internationally, faces four years watching President George W. Bush guide his conservative agenda through a Republican Congress. Bush will likely have the opportunity to make lifetime appointments to the Supreme Court, potentially shaping the third branch of government for decades.” What is this story coming out now for? The timing of this story, it’s like the election was just yesterday and all of as sudden these guys have realized what hit them. “Democrats’ choices are grim. Do they…” This is a story, folks. This is disguised as a news story. It’s not a news story. It’s a oh-woe-is-us story disguised as a news story. A member of the press also identifying with the Democrats, writing of his own fears but not using his own name. These are his fears, placed in the hearts and minds of his Democrat cohorts. So any time I see the word “Democrats” in this story, I’m going to substitute the word “Our.”
“Our choices are grim,” says AP. “Do we acquiesce and try to work with Republicans in hopes of having some say, or do we stand firm and fight a president who has just won a clear-cut victory? True to our reputation for vacillation, we’re doing both. Consider the inauguration comments of the two top congressional Democrats,” and then they go on to quote all of these various things that you already heard, and then they actually go on to say here — this is Ken Guggenheim is the writer. “Bush’s top domestic issue, partially privatizing the Social Security system offers huge potential for Democrats ahead of the 2006 congressional elections. They are hoping that the Republicans will self-destruct,” and that’s about the only hope that they have, and so it’s getting even bleaker. In fact the Washington Post has a similar story, if I could find it in the stack here. Well, it’s somewhere. I’ll get it, but it’s more of the same. The Democrats are just beside themselves, don’t know what to do. “What’s happened to us?” That’s why I say this front page of the New York Times Week in Review piece yesterday when they start looking at this in terms of Bush trying to dismantle FDR’s New Deal. 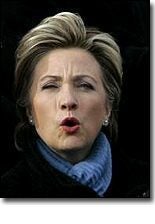 The entire discussion engulfing the country last week: Was President Bush and dangerously inspiring the country to spread freedom and liberty around the world. Last week the dangerous part was Bush had too much resolve. Bush has too much vision. Bush is Utopian, Rush is unrealistic. Where was Hillary Clinton? She comes along and says America’s leaders don’t have a vision? The economy is on the brink of collapse? Do you know what? There are new numbers in on the ten-year projection for the deficit. It’s down a trillion dollars. The projection was 2.3 trillion, or 2.2 trillion, the deficit projection for the next ten years is down to 1.2 trillion. Well, it’s bad news, but it’s better news than what the projection was! We’ve cut it in half! We’re growing. The point is, the only reason the deficit comes down, because the economy is growing. She doesn’t know what she’s talking about. She has no clue what she’s talking about. “The history of America is to make sacrifices today for a better tomorrow”? Let me tell you something, folks: This is why the Democrats are losing ground and they don’t even know it. If adults with kids hear that they aren’t making sacrifices today, they may have a few things to scream at Mrs. Clinton. For her to sit around and say Americans aren’t making sacrifices today for a better tomorrow? What does she think American parents always do?
American parents are constantly sacrificing for their kids, for their kids’ future, to put them through college, to do whatever they can to improve their lives. It’s just that version of sacrificing is you pay more taxes. You pay more taxes to Washington so Washington can get more powerful — Democrats meaning Washington — so they can get more powerful and spread more money around and buy more voters. I don’t know what sacrifice Hillary Clinton has made whatsoever, other than to stick with her husband. That’s probably a sacrifice in her mind, but beyond that what sacrifice is she making? All she and her husband can talk about is how damn wealthy they are anymore. Well, fine. If you’re that rich and you’re in top tax brackets and you don’t like the taxes, give the money back, but don’t tell us what we have to do with ours and then don’t start telling America’s parents that they aren’t sacrificing, Mrs. Clinton. You talk about out of touch? I mean, for crying out loud! The whole conversation last week was about a vision that’s too big, a vision that’s too broad, a vision that’s too unrealistic. She comes out Sunday after the Trump wedding and reception and says, “There is no vision”? Good grief, ladies and gentlemen! Do you realize how tough even for a seasoned professional like me it is to keep up with these people?
BREAK TRANSCRIPT

RUSH: If you’re still not convinced of the dregs the Democrats are in, try this story. Our old buddies at NewsMax.com ran this story Saturday night. “Strateg[er]ists Eyeing Deal for Clinton Third Term — Political strateg[er]ists are reportedly pondering a deal that would allow Bill Clinton to run for president again by getting Republicans to agree to a change in the constitutional ban on third terms, calling it ‘a long shot,’ U.S. News &amp; World Report says the deal would work like this. Congressional Democrats will okay a constitutional amendment allowing naturalized citizens like Schwarzenegger to run for president, if Republicans help kill the 22nd Amendment. ‘Right now it’s the talk among political strateg[er]ists,’ says the magazine’s Washington Whispers section, but look for it to spread on Capitol Hill when Senator Hatch reintroduces his plan to let naturalized citizens run for president after 20 years. Clinton himself has boasted that he could be reelected one more time.” So that’s the deal: That’s what the Democrats are thinking in Washington today. (interruption) Well, Mr. Snerdley, come on, now! Snerdley says, “I thought they just got through talking about how constitutional amendments are sacred and should not be changed and the constitution should not be changed and blah, blah, blah, blah.” Only in their self-interest will the Constitution be changed. Anytime they deem it harmful they will not suggest it be changed, but that’s not the point. The point is, they don’t understand. They’re thinking they want the guy who sowed the seeds of their demise to rise once again to the top of their party, the guy who oversaw their first loss of the House in 40 years, the guy who oversaw the loss of the Senate, the guy who oversaw the elevation of George W. Bush, the guy who provided all of the ammo for conservative media to skyrocket to the top, Bill Clinton — They want him back, and it’s not just that, the fact is their eyes are in the back of their heads. They’re looking to the past. Oh, these people are discombobulated, folks. It’s a wonderful sight to see don’t misunderstand. Here’s David in Poughkeepsie as we start on the phones today. Nice to have you on the program, sir, and welcome.
CALLER: Well, thank you, Rush, making 14-years-of-listening-and-learning megadittos.
RUSH: Thank you, sir, appreciate that.
CALLER: And as American, I can say you America’s anchorman.
RUSH: Well, I appreciate that, too.
CALLER: My comment, what strikes me about the Democrats after this election and having listened to you for all these years is I used to get upset listening to them, and it finally dawned on me these comments that Boxer made — and I’m so glad you brought up Hillary’s comments after this weekend, her speech — this is what they are. They swing. They swing. Right after the election the talk of, “Let’s change. We have to reform our ways. What are we missing? What are we not doing,” but it just strikes me that this is, I guess it just hit me on my head: This is who they are. They don’t get it, they never will get it, you know? I dare say compare Bush’s speech, as you mentioned yourself, “Listen to Kennedy’s inaugural speech when they slobber over that whole section all the time and compare it to Bush’s, I would dare say, current inaugural address that he made.”
RUSH: Look, it’s like I said last week: To really understand these people, you have to understand psychology in addition to politics. I think this goes a little bit beyond politics. Politics is their reason to exist, and power, power politics is their reason to exist, but the psychology is what you have to examine here because you’re right, you’re just saying what

I’ve said a number of different ways. They’re simply going back to their own playbook with 30-year-old templates they sit and they shout and they swing all these same accusations: “Republicans going to cut Social Security. Republicans are going to kick you out of your house. Republicans going to cut taxes on the rich and you’re going to be poor,” blah, blah, blah, blah. I mean, it never does change, and whenever they get in trouble they go to what’s familiar and they start echoing and shouting these old charges and phrases again with no relevance to the present, and they haven’t had to think about it. You know, this is the problem with monopolies. I don’t care whether they happen in business or politics, you get lazy. You talk about hubris? I mean, hubris comes over people who have monopolies, this feeling of overreaching and untouchable power. They still have it.
They had it for so long they still haven’t come to grips with the fact that they’re on the losing end, but again I’m not trying to beat a dead horse, but this New York Times piece on Sunday in the Week in Review section — and remember when I say the New York Times I say this only because the New York Times leads a lot of the thinking on the left, particularly in the media, and so if the New York Times is doing a story on Bush is unseating FDR, and that’s what Social Security is all about, that may be a wake-up call to them. I mean they may have on the surface gotten offended because FDR gave them Social Security and FDR is their patron saint, but when the New York Times writes many thousands of words about it, they’ll have more than just a gut check or a reaction. They’ll start thinking about it, and it may cause them to slap themselves upside the head and really take note of just how far they have fallen while Bush has accomplished so much, and while they keep opposing and trying to stop, Bush’s accomplishments are going to keep rolling up and adding up, which is going to make their pitiful performance compared side by side to be even more pathetic than the public already judges it to be. They don’t have one thing that they can say they stand for. All they are is a bunch of people that can regale you with what they are against, with conspiracy theories and fear but they cannot be positive, even about their own agenda because they don’t have one that they’ve got the guts to be honest with you about.
END TRANSCRIPT