RUSH: You know, I said last week, we played — maybe it was two weeks ago — played audiotape of a debate between Justice Stephen Breyer and Justice Scalia on whether or not it is proper for the court to use international customs and law in determining their rulings in American law — and Scalia mopped up. Breyer looked like an absolute plebe, not a seasoned judge, and I made the comment: “I wish Justice Scalia would do more of this.” Well, he is. He is out on the trail. He’s made two speeches recently, both aimed at supporting Christians and Christianity, and I want to share with you the details of Justice Scalia’s comments when we get back.

RUSH: Two stories on Justice Antonin Scalia. First is from the Baton Rouge, Louisiana, Advocate. “U.S. Supreme Court Justice Antonin Scalia said Saturday that people of faith should not fear being viewed by ‘educated circles’ as ‘fools for Christ.’ The justice — in Baton Rouge to address the Knights of Columbus Council 969 centennial celebration without charging a fee — told a largely Roman Catholic crowd of 350 at the Holiday Inn Select that there’s nothing wrong with ‘traditional Christianity. 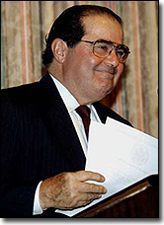 To believe in traditional Christianity is something else,’ Scalia said. ‘For the son of God to be born of a virgin? I mean, really. To believe that he rose from the dead and bodily ascended into heaven? How utterly ridiculous.

To believe in miracles? Or that those who obey God will rise from the dead and those who do not will burn in hell? God assumed from the beginning that the wise of the world would view Christians as fools … and he has not been disappointed.’ Scalia praised ‘traditional Catholics’ who say the rosary, go on pilgrimages, kneel during the Eucharist and ‘follow religiously the teaching of the pope,’ adding that ‘intellect and reason need not be laid aside for religion. It is not irrational to accept the testimony of eyewitnesses who had nothing to gain. There is something wrong with rejecting a priori (deductively) the existence of miracles.’

“The outspoken conservative justice — known for his views on religion in America — didn’t shy from them during his visit to south Louisiana Saturday. He didn’t discuss any specific issues before the high court, but did tell those in attendance they had ‘no greater model’ for their faith than St. Thomas More. The Catholic martyr and considered the patron saint of lawyers, repudiated Martin Luther and refused to endorse King Henry VIII’s plan to divorce Katherine of Aragon or recognize the king as the supreme head of the Church of England. More was found guilty of treason and beheaded in 1535.”

You seen that movie or the play A Man for All Seasons? It’s worth seeing if you haven’t. Scalia said, “‘I find it hard to understand people who revere Thomas More but who themselves selectively oppose the teachings of the pope,’ said Scalia, widely cited as a potential nominee for the position of chief justice when William Rehnquist leaves the bench. ‘If I have brought any message today, it is this: Have the courage to have your wisdom regarded as stupidity. Be fools for Christ. And have the courage to suffer the contempt of the sophisticated world.'”

Justice Scalia. And then in Ann Arbor, Michigan, yesterday: (AP) “U.S. Supreme Court Justice Antonin Scalia said that judges should look to historical practices when ruling on religious issues. Speaking at the University of Michigan, Scalia criticized judges for using what he called ‘abstractions’ to interpret religious issues when they should be looking to the text of the Constitution itself.” Said Scalia, “The Constitution says what it says and does not say what it does not say.” Well, I have said something like that in the past. “Words mean things.” Words mean things. “The Constitution says what it says.” It doesn’t say what it doesn’t say.” Go look to it for guidance. Of course, the American left can’t do that. 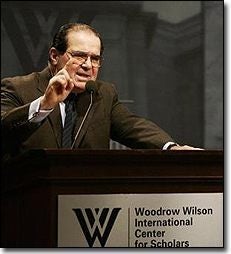 They have to find things the Constitution doesn’t say and find them constitutional, and then they look at things that the Constitution does say and say, “Ah, the Founders wouldn’t have meant that if they knew what was going to happen. Second Amendment? Nah! It doesn’t belong there! No, no, no. The Founders, if they’d have known what was going to happen with guns in this country, why, they never would have written the Second Amendment. Abortion? Oh, yeah, it’s there. We found it. It’s there. Judges said so in ’73. They found it.”

“Scalia’s appearance was sponsored by Ave Maria School of Law, a private school in Ann Arbor backed by Domino’s Pizza founder and Roman Catholic philanthropist Thomas Monaghan. Scalia also is a Catholic. Some of the court’s biggest and most contentious cases involve religion.” So I’m happy to see this, happy to see Justice Scalia getting out there. He’s a fearless man — and, as I’ve always said, ladies and gentlemen, “If I didn’t have my own brain, I would like to have Justice Scalia’s brain.”