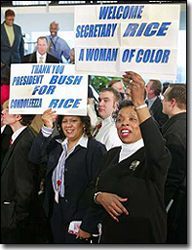 Now, Deborah Orin in the New York Post: “It’s not just Republicans who are livid at how Democrats have ripped into secretary of state Condoleezza Rice. So are plenty of black Democrats who say their party now risks alienating its most loyal supporters — and it doesn’t help that Howard Dean, the front-runner to be the new DNC chairman, cheered the anti-Rice crowd. Dean, after all, had to apologize last year for vowing to ‘court guys with confederate guys in their pickup trucks.'” Remember that? And, by the way, I saw a story, got it here in my stack somewhere. Dean is considered a front-runner for the DNC job, which is not what Hillary and Bill want and a whole lot of Democrats don’t want it but he’s considered the front-runner, this story says, in part because he has an ability to reach out to southerners. I don’t know where this is coming from, but nothing could be further from the truth. You go down there and you talk about how we gotta court guys with Confederate flags in their pickup trucks? He had to apologize for that, yet he is considered their best liaison? If Dean’s the best they’ve got to court southerners they’re in worse trouble than even I thought.
It also doesn’t help that (New York democrat) Senator Schumer, “who voted for Rice, nevertheless used the battle to send out a fund-raising e-mail for Senate Democrats featuring Barbara Boxer who called Rice a liar. Democratic pollster Ron Lester, who is an expert on the African-American vote, said, ‘The Democratic attack on Condoleezza Rice was very foolish and potentially costly because it could backfire among blacks. A lot of African-Americans are watching this and they’re wondering why Democrats are going after her so hard. She has an exemplary record. She’s probably better qualified than most secretaries of state that we’ve had. Besides, the Democrats have supported far less qualified blacks in other positions, and they’ve triumphed and they’ve tried to push them ahead on the basis of affirmative action.'” They believe in affirmative action, minority rights, and here comes a female African-American they’re doing their best to sandbag her. Now, I don’t want to go too far with this. This is not to say that Condoleezza Rice is a above criticism, nobody is saying that, nobody is saying that it is incorrect for people to disagree with her policies or this kind of thing just because these black doesn’t mean she should get a pass. And that’s not what the blacks are saying and that’s not what anybody else is saying.

What they don’t understand is, that here you’ve got this party that has swept qualifications and everything else aside to promote black people simply to promote black people and other minorities, women, and now all of a sudden here comes an eminently qualified woman and they’re doing their best to destroy her You know, they aren’t allowed to call each other liars on the floor of the Senate. Senator X can’t call Senator Y a liar, but they can do it

when they talk to a witness or a nominee such as Condoleezza Rice. You know, so what you’re having here is a mixed message to the very loyal African-American community, loyal to the Democratic Party. Even if they don’t know Condoleezza Rice that well, they see an accomplished black woman being destroyed or attempted to be destroyed, by the Kennedys and the Boxers of the world who, in other branches of life, go out of their way to promote qualified minorities. And so it’s causing them to scratch their heads. “Another high profile black Democrat was even more blunt, saying the taxi on Rice featuring Ku Klux Klan kleagle Robert Byrd, made me sick to my stomach,” unnamed high profile black Democrat. “Only 13 Democrats voted against Rice but party leaders were incapable of reining them in and so let them become the public face of the Democratic Party. The only black senator, Democrat Barack Obama [Osama] of Illinois, voted for Condoleezza Rice.” He was the only one.

Now, what is this, “The party leaders were incapable of reining them in”? Don’t believe this for a second, folks. Those 12 seconds were leading the charge for a bunch of other Democrats who are afraid to do it along with them! Harry Reid was in on this. This was all part of a planned scheme to raise money and to try to obstruct her ability to be secretary of state and her future opportunities as a candidate. This is right out of their playbook. For the story to hit now that these were renegades, out of control, that the party couldn’t control ’em? Come on, folks! We didn’t just get off a turnip truck yesterday. I’ve never even been on a turnip truck.
END TRANSCRIPT