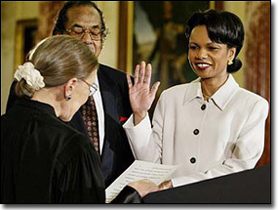 PRESIDENT BUSH: On Sunday, the Iraqi people will be joining millions in other parts of the world who now decide their future through free votes. In Afghanistan, the people have voted in the first free presidential elections in that nation’s 5,000-year history. The people of Ukraine have made clear their own desire for democracy. The Palestinians have just elected a new president, who has repudiated violence. Freedom is on the march and the world is better for it (Applause).

RUSH: Yes, yes. There was some applause there at the State Department. Here’s more from the president.

RUSH: Stop the tape! That includes the American Democratic Party, ladies and gentlemen.

PRESIDENT BUSH: Our nation will be more secure. The world will be more peaceful, as freedom advances. Condi Rice understands that — and the terrorists understand that as well, and that is why they are now attacking Iraqi civilians in an effort to sabotage elections. We applaud the courage of ordinary Iraqis, for their to surrender their future to these killers. No nation can build a safer and better world alone. The men and women of the State Department are doing a fine job of working with other nations to build on the momentum of freedom.

RUSH: The president now mentions in the final bite — we have some of the issues that matter at the State Department, AIDS, fighting disease, and then tells them that they have a Secretary of State who has character and wisdom.

PRESIDENT BUSH: In the coming months and years, we must stop the proliferation of dangerous weapons and materials. We must safeguard and expand the freedom of international marketplace and free trade. We must advance justice and fundamental human rights. We must fight HIV/AIDS and other diseases, and reduce poverty. Each task will require good relations with nations around the world, and each will require a secretary who will lead by character and conviction and wisdom. To meet these times and tasks, America has its in Dr. Condoleezza Rice, now Secretary Condoleezza Rice, our 66th Secretary of State. (Applause).

RUSH: Right on! Right on! Right on! Right on! There you have it. So that was the president at the State Department today. Now, ladies and gentlemen, I don’t want to throw cold water on anything here but I have to address this. I saw a story today that just boggles my mind. You know I’m very optimistic about the future. You know my thoughts about what’s happening to the left and how they’re imploding and so forth, but there are risks that accompany this implosion. When your opponent is destroying himself, the tendency is to get out of the way and let him do so. But unless you take advantage of the opportunity to plant your own roots, so that your ideals and principles grow in the future, you’re just waiting for your own implosion to take place.

And as I look out there across the great wide spectrum that is this country and its electoral politics, you look at things — realistically here, not looking for negativism, just looking realistically, things — that might present a problem to the good guys, the conservatives, the Republicans in all this. And to me, there’s one issue out there — well, maybe two. Spending. This is something and I’m glad to see the president finally trying to get hold of it, but there’s one real issue here that could break up the so-called Republican-conservative coalition, and that is immigration.

If something is not done, my friends, it simply is untenable. We cannot maintain our sovereignty without securing and protecting our borders. We simply can’t. Not in an era where terrorists around the world seek entry to this country to attack from within. It is simply something — you know, all these arguments that we’ve heard, “Well, you got to let immigrants in because they’ll do jobs that the American people don’t want to do,” and there was a time I believed that. There was a time economically that that was persuasive with me. But I think it’s gotten to the point here where it runs the risk of defining

a whole lot of pay scales on different jobs simply because we’ll let people who will do it for next to nothing into the country do it, then it ends up depressing various pay scales or can if something’s not done about this. There were two things recently that sent me to this. I’ve got one of them in my hand here. The other one, we laughed about it, but when the story cleared the wires that these 30 Hollywood people, these actors, writers and producers, tried to make the case that illegals ought to be given driver’s licenses. What good are our laws? If we’re going to send people to jail for avoiding taxes, for breaking the law, whatever we send them to jail for, why don’t we look askance at people violating immigration law? And say, “Well, there’s nothing we can do about it. We’re just going to grant them temporary status and give them a chance to be good citizens and eventually become full-fledged.”

You see, these Hollywood people out there, they would revolt, they would literally revolt if the immigrants became camera operators and writers and producers for two bucks an hour. They wouldn’t put up with that for a minute, or actors for minimum wage, but let them come in as caterers and limo drivers and nannies or whatever else the Hollywood people want them for and then it’s perfectly fine for them to be illegal.
Now, get this story. This story comes today from the San Francisco Chronicle. At least that’s where I found it. “Foreign Secretary Says Mexico May Ask International Courts to Block Proposition 200 — Mexico may turn to international courts in efforts to block a new Arizona law limiting services to undocumented aliens, said Mexican foreign secretary Luis Ernesto Derbez. He said this on Wednesday on an interview on W radio, that Mexico might take such a step after it’s exhausted all possibilities under US law to halt Prop 200.” Now, these are not the first of these kinds of stories. It’s just the latest, where the Mexican government is attacking the United States for enforcing our immigration laws against its illegal citizens, entering our country illegally.
“Mexico’s foreign department lawmakers have repeatedly complained about Prop 200 which took effect this week. It requires proof of citizenship to vote or to receive state benefits and Mexico is demanding that international courts overturn this.” Mexico is essentially sending illegal citizens, its own citizens, to this country illegally and now attempting, through international courts, to stop us from enforcing our own laws!

Now, I’m going to tell you something, folks. This issue, if not handled properly by this administration, it could be the issue that severs the existing Republican coalition and could see to it to create the rise of a new Perot or somebody, where a president only needs to get 43% of the vote to win, a’la Bill Clinton, because some of the Republican coalition breaks away and votes for the newcomer. This is the issue that could cause that to happen if they’re not careful.
END TRANSCRIPT